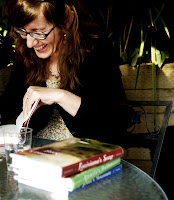 The theme these days on "A Good Blog is Hard To Find" is rejection or critiques. Or both. I’ll start with rejection and maybe I’ll find a way to get to the other. By far the most difficult rejection I ever had was from an agent, and if I’d believed her, I would never have written another word. It was a rejection of stunning cruelty, but I rejected her rejection.

It was back in 1994. She came to see a play I’d written or maybe I’d sent her a query. Anyway, she wanted to meet for coffee. She had read and loved an early draft about growing up on the gridiron of college football. It was a kind of GREAT SANTINI from the teenage daughter's point of view.

She thought it needed a good editor, though, a freelance editor. I agreed. I had no idea how to shape this story of being a coach’s daughter into a book. I had bombarded my writing group with it for three years, and a shaky first draft had emerged.

So I took this agent’s suggestion and the editor she recommended. The editor was very reasonably priced, and it helped to have a careful reader who knew nothing about my life as a football daughter, who’d moved regularly with her itinerant coaching family in search of the opportunity to win ball games.

I also quit my job as an ESL teacher in East Los Angeles. I couldn’t write my novel, teach full time, and raise a family. Our kids were four and six. I worked on my novel, OFFSIDES, while they were in school and on the weekends. I revised the book for another year. I would write three or four chapters, share them with the editor, and she would fax back notes or comments or questions. It was long before the days of email. But I felt I was on the right track. Chapter 41 became chapter one when my alter-ego character decided she was not going to move to another football town again. The idea of beginning with a conflict was something new to me as I tended hang out in voice and scene without a lot of plot.

Anyway, after a year of revising and reshaping it into a book, I sent it back to the agent. She didn’t respond and she didn’t respond. Then one summer night in August I found it on my doorstep. She had mailed it back with a letter saying something to effect of “I don’t know what you did to your story, but it’s just awful. The voice is gone. And where is the dad?” Trembling, I looked at her notes in the manuscript. They had stopped at page 80. She hadn’t even read the whole book. Though, I’d taken her advice and the editor she recommended and did everything she asked me to do for more than a year, she had stopped reading on page 80.

Let's just say it was a grief-stricken Jack Daniels night, and I think I will just leave it at that. That is another essay. But this is how I rejected her rejection. A week or so later, a thought occurred to me while I was bathing the kids. This was the thought: “She is wrong. She is wrong. She is wrong.” And this was not denial speaking. I just knew she was wrong.

So I took the book, all five hundred pages of it, and I read it again with a cold editor’s eye, and I systematically cut one hundred pages. I was ruthless and killed everything that I repeated or did twice or hit the same note too long. I honed and sharpened and got to the point a whole lot quicker. I soon realized it was way too flabby, so I cut those one hundred pages. Then I sent it to another agent. That agent took it and she sold it to William Morrow within one month.

Six months later, Diane Keaton optioned OFFSIDES for a film with Jim Henson Productions and we spent the next three years in the Hollywood mill. That, too, is another essay. The New York Public Library named, OFFSIDES, one of the best books for the Teen Age in 1997. It was before the dawn of Young Adult, and my editor at William Morrow at the time told me, “If you publish this young adult, it will be the death knell of your career,” so it was published as literary fiction.

Sadly, nothing came out of the film and even though, OFFSIDES, had great reviews it went out of print within a few years. You can find it for a buck on Amazon. But that agent who rejected me contacted my screenplay agent at the time and asked, “Can I have her next book?”

Now I absolutely believe in readers and feedback and criticism to make a book better and stronger. I would be nowhere without my group of close and trusted readers in the early stages of a manuscript, who tell me truth. But I don’t believe in cruelty when a writer is finding the story and finding her voice. I was a young novelist, and it was my very first novel, and this agent had set herself up as a kind of encouraging mentor and then said, "Never mind." But it was probably the best lesson I could have learned - to trust my own voice and not to quit no matter what an agent had decreed.

And a word about critiques...I teach creative writing now at the University of Alabama Birmingham, and I have taught for years in freelance workshops, and I do writing workshops for kids in schools. I was lucky enough to have a professor in college who taught me everything I know about teaching because she modeled such excellent teaching. Her name was Mary Jane Harvill, and she made us believe in the possibility of ourselves as artists. It was an acting class – not even a writing class. But we had to go on stage and become these characters.

I played Blanche with a boy who would have made a knockout Blanche, and I definitely would have been a much better Stanley. But we had fun. Mary Jane made us laugh and find joy in creating characters, and even when we were awful, and we were awful, it was never about humiliation, but it was about being better – reaching down inside and finding something new to make the characters work.

I don’t allow my writing workshops to be anything but supportive and generous places to discover how to make the work better. We ask the hard questions, but I hope no writer ever leaves my workshop lacerated or doomed the way I felt that night when my first novel arrived on my doorstep like a body bag oozing failure.

It’s listening to the voice inside and keeping the critics at bay and revising and reshaping to find ways to make the stories sing.

Kerry Madden is author of the Maggie Valley Trilogy, published by Viking Children's Books. The trilogy includes Gentle's Holler (2005), Louisiana's Song (2007) and Jessie's Mountain (2008), set in the heart of Appalachia in the Smoky Mountains. Her first novel, Offsides, was a New York Public Library Pick for the Teen Age in 1997. Her book Writing Smarts, published by American Girl, is full of story sparks for young writers. Her latest book, Harper Lee: Up Close, published by Viking, made Booklist's Ten Top Biographies of 2009 for Youth. www.kerrymadden.com
Posted by A Good Blog Is Hard to Find at 10:13 PM

This is an amazing story and so inspiring. A great example of drowning our other people's voices and listening to the small true voice we all have in ourselves.

I hung on every word.

Kerry-
I spent years working with a savvy, brutal, funny, wonderful group of critiques known as our theater group. It taught me how crucial that appropriate feedback can be. AND how to listen to my inner voice. When I asked a woman I respected to read my first novel by the time I received her comments I had a NY agent that loved it, a publishing contract, and others who had fallen in love with the story. She had finally sent the book back telling me that she couldn't even finish it and I needed to learn how to write. Know what? She was wrong!
Thanks for sharing part of the eternal story - book beauty is in the eye of the beholder.

Back in my multiple subbmission agent-less days, I got a rejection on a picture book, long after it was already published.
Amy G Koss

I big AMEN to that wonderful story! Be true to yourself as afterall, it is YOUR story and YOUR voice. Everything is subjective and most editors really are just selecting books that speak to them. I love everything you write and look forward to your writing future!

Thank you for these beautiful comments. River, I can't believe that woman...I think I know her. Wow! Anyway, thanks for these loving and wonderful words. Let's always keep the naysayers at bay where they belong and stick to the business of writing our stories.

Interesting way to leave some new knowledge, and also I liked the headline which you picked above. I think we need more time to share all the knowledge. I've been looking a good editor too, for my new website, so I would love if you can send me some information about it.

This is a great website, so many people need this information, thanks for providing it. I love your color scheme too!