My Piggly Wiggly series has been out for over a year now. The debut novel, Waltzing At The Piggly Wiggly, went to trade paper in June, and the sequel, Kissing Babies At The Piggly Wiggly, was released in hardcover this August. Two more novels will follow in 2008 and 2009, continuing the adventures of the citizens of Second Creek, Mississippi, where people ballroom-dance in the aisles of the local Piggly Wiggly, strange weather patterns affect the characters in unexpected ways, and lovable quirks are not only expected but practically required for citizenship.
I'm a Deep Southerner by birth, growing up in historic Natchez, Mississippi, which gave me a boost in observing eccentricity with a smile. Then I spent four wonderful years studying English and Creative Writing at Sewanee (the University of the South) in Tennessee. There's not a lot to do on top of the mountain that Sewanee calls home, so I made the most of my liberal arts education--great for a writer! It might be said that I come by my interest in writing naturally. My father came out of World War II, went to New York as both an editor and writer and turned out scads of fighter pilot and detective stories in the genre that is now referred to as pulp fiction.
As for my writing motifs, I like to portray strong Southern women taking charge of their lives, just as they do in the Piggly Wiggly series. Humor is a big part of my plots, but I was taught that all novels, regardless of the genre, should be plotted like good mysteries. Leave your reader guessing and wanting to turn that page. So, there are a few twists, turns and surprises in my novels to keep my readers on their toes. 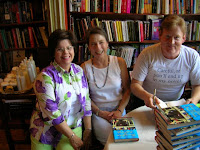 Drop on by Second Creek, Mississippi, if you get the chance. Find out who the Nitwitts are. Pull for Mr. Choppy Dunbar, second-generation owner of the Piggly Wiggly, to solve both his business problems and his troublesome romantic past throughout the series. I'll be there waiting for you in spirit!

Here's an interview with Robert Dalby

Q. Where do you see yourself as writer in five years?
A. In five years I'd like to be established enough to do stand-alone novels on a variety of Southern themes. I'm enjoying doing a series, but eventually I'd like to branch out.

Q, What books are on your bedside table right now?
A. Actually, I have the manuscripts of two unpublished writers I'm reading right now. I'm just winding up teaching a writing/getting published course at a local community college, and I'm evaluating the manuscripts of two of my more promising students with a view to recommending them to my agent if I feel they are worthy.

Q. What advice do you have for aspiring writers?
A. Be wary of scams of all sorts--no reputable agent will collect a dime from you before selling your work and getting that contract and advance check on your behalf. Remain dedicated and persistent--don't be discouraged by rejection. Don't quit your day job!
Q. What’s the funniest thing that’s happened to you at a book-signing?
A. Funniest experience has to be the time a reader pointed out to me after I'd done a brief talk before the signing that I'd ended my book with a preposition. I dug deep and remembered a Winston Churchill quote that my father had given me, and I replied: "That observation, Madam, is something up with which I shall not put!" Everybody in the audience laughed, including the woman
Posted by A Good Blog Is Hard to Find at 11:40 AM

Hi Robert! I LOVED "Waltzing At The Piggly Wiggly." I didn't realize it would be a series or that you had another book out. I'll find it - and I'm sure I'll love it! Thanks!

Hi! I was wondering if Robert was coming out with a new book in his Piggly Wiggly series anytime soon?

Robert, Please email me at
nnj1@ra.msstate.edu

I am working on a page for you on the Mississippi Writers and Musicians project at mswritersandmusicians.com
and I need some information.

I love the Piggly Wiggly series. Southern novels are not usually what I read (except for To Kill a Mockingbird every 5 years or so!) but I really enjoy the characters and situations in your gentle books. Can't wait for the next one!

Where have you disappeared to? I cannot find you on Instant messenger anymore! Luckily a google search for you turned up this blog.

Congrats on your success!

Just finished reading "Kissing Babies at the Piggly Wiggly" What a wonderful book! I wanted to stay there. Barbara

Robert. Only one of your books is available for the Kindle. I would love to read all the Piggly Wiggly books, but am waiting until they are are Kindleized. Is there anything you can do about this?

Hello, Robert. It is a pleasure to meet you on blogspot. I write about disability issues and mentioned "Dancing at the Piggly Wiggly" in one post. Would you mind doing an interview over email? I would be honored to feature you in a blog.

I truly enjoyed reading about the women. :) Thank you for sharing your story with us. I can be found at http://misspurpleladyonwheels.blogspot.com/

Amanda: I would be happy to do an e-mail interview with you. Thanks for your feedback. You can reach me at: rjkuehnle@ms.metrocast.net

I just finished reading "Kissing Babies at the Piggly Wiggly" and wanted to thank Mr. Dalby for his mention and support of public libraries. I work for a public library and love the conversation by the "Book Sheriff" disucssing the importance of libraries in our society.

I heard your recent interview on MPR. When I was a kid growing up in Ft. Walton Beach, I played for 3 baseball teams, Ft. Walton Beach Motel, Jitney Jungle and, yes, Piggly Wiggly. Too bad you're not writing any more PW books; "Playing for Piggly Wiggly" has a nice ring.

Just read "Waltzing at the Piggly Wiggly"..loved it..now will read whole series...
The only disappointment in WATPW was your representation of Elvis with greasy hair and singing "You Ain't Nothin'But a Hound Dog"...You could've had Laurie walking down the aisle to Elvis singing "Can't Help Falling in Love with You" and continued the wedding music with "The Hawaiian Love Song"...

I hope you will present Elvis in a more positive light in future books :) You could gain a LOT of readers as there are thousands of us devoted Elvis fans...

Hello Bobby: Yes, that was your name when I was editor of the "Echoes" and you were a Feature Editor in 1963. You wrote in red ink in my copy of the Colonel Reb. I'm reading "A Piggly Wiggly Christmas" and enjoying it very much. How exciting to discover I knew the writer at NAHS. Natchez is full of stories and your characters are delightful. Why not a movie or television show? Congratulations on your writing success.

Jackie: Great to hear from you. I also caught up with Cara Lynn Herron Cavin last summer, as she was in Natchez the same weekend I had a signing. We had not seen each other since high school and compared notes on the summer of '63 when we both went to Northwestern in Evanston for a summer session. As I recall, Cara Lynn's nickname for you was 'Jacquith Ann.' Hope you have enjoyed all the novels in the series.

Yes, this is Jacquith Ann. How terrific that you remember my nickname. I haven't seen Cara Lynn since 1963. We go to Natchez at least once a year and will be there in late April for a family reunion. I'm recommending your books to my vast family and all my friends. I'm so proud of you!!!!

Why you did that? I just love them... Piggly Wiggly had been rising my thoughts about those topics and you already know that, because it's all about new adventures.

I have just completed the rading of A Piggly Wiggly Christmas, your fourth book in the series. I must say it has been many years since books held my attention as well as these have. The clarity and colour of the setting and people in Second Creek has made them come alive in my mind. I laughed and cried so many times as the spirit of Second Creek and its people were brought alive by your words. I am now hoping beyond hope that "The Square Deal - A Piggly Wiggly Rebuilding" is forthcoming.

Indeed it is a great saga, I did enjoyed a lot the books, they are so nice to read.