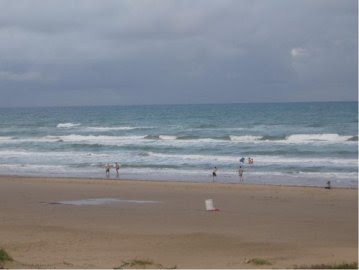 Sixteen years ago a friend and I were at the beach with our young daughters. Earlier that morning I'd made the prosciutto and mozzarella sandwiches and potato salad with capers and Dijon mustard. That was the kind of thing I did back then, spending hours, searching for the right recipes and ingredients to make memorable meals. I call that period in my life, my Martha Stewart Wanna-Be Era. If I'd just listened to my gut back then, I would have known that I was living the wrong life.

I had just unwrapped the sandwiches when my friend announced she was going to write a novel one day. A knot formed in my throat as I watched our daughters stand in the sand and wait for the foamy waves to reach their toes. That had been my dream. Now the time I'd taken to create the special meal seemed like a frivolous investment. Like the waves before me, returning to the sea, I had let my dream of writing slip away.

I didn't share my thoughts with my friend, but six months later I was sitting on my screen porch with a pen in my hand. It was June 15, 1994. There were a few false starts on yellow pads, but eventually the voice of Tiger Ann Parker came to me and I began the book I was meant to write. Anytime a writing class was offered nearby I enrolled. I listened to everyone who had anything to say about my story. Many times I took other people's advice and ignored my own gut.

When I had invested seven drafts in my book, I decided to send out the first part of the manuscript to five potential publishers. In my gut, I knew it wasn't ready. Something about the story didn't feel right, but I was impatient and slipped the envelopes in the mail anyway.
Two weeks later, I received a phone call from an editor. "Kimberly, we received your manuscript in our office," she said, "but we don't publish this kind of story."

"Oh, okay. I'm sorry." I was embarrassed about not thoroughly researching potential publishers.
"Do you have the rest of the manuscript?" she asked.

"We have a house that publishes that kind of story. I've already talked to an editor there and she's interested in reading it. If you overnight it to me, I'll walk it through for you. I'm going to give you her phone number. If you don't hear from her in a month, go ahead and call her ."
I thanked the editor. Then I hung up the phone, thinking, "Wow, that was easy. You send out your manuscript and if it arrives at the wrong place, they let you know and walk it through to the right place."
Of course, it wasn't that easy. A few months later, after a couple of phone calls, the publishing house rejected it. I kept revising and I continued to have close calls, but ultimately the story was always rejected. The entire time I knew in my gut that the second half wasn't working. I tinkered with the sentences, but the changes never measured up to an offer. Meanwhile I attended a writer's conference and obtained the name of an agent who represented children's literature.
By then I'd been rejected by a lot of agents, but this time the agent responded to my query letter by saying, "Yes, I'm interested in reading your manuscript." A couple of months later she was representing me. Now I had someone else to open my rejection letters first. And there were plenty--seventeen.
One day, an editor rejected the story, commenting, "I like her writing, but the second half seems like a soap opera."
He was confirming what I already knew, what my gut had told me all along. Now I was finally ready to listen. I called my agent and asked her not to send out the manuscript again until I'd revised it. I told her. "I don't know how to fix it yet, but I know what's wrong."

Ironically, the next week, the story sold anyway. Six months later, my editor's letter arrived. The first paragraph mentioned all the things that she admired about the story. Then the next six pages talked about what I needed to improve in the manuscript. "I don't believe the second half of your book works as it now stands."

Finding the second half of my story wasn't easy. It meant revisiting the setting, researching more, and opening my mind to new possibilities for the plot. Through hard work and a lot more revision, I discovered the second half. And when it happened, I had an added benefit. I had learned to trust my own gut. 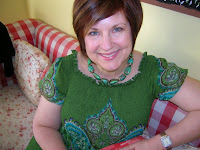 Kimberly Willis Holt writes stories for young people because she hasn't quite gotten over being twelve. But she has continued to trust her own gut and she is still known to have her Martha Stewart Wanna-Be moments.

Visit Kimberly's blog at http://apenandanest.blogspot.com/ where she explores how her sixty's ranch house provides comfort, inspiration and sometimes havoc for her writing.

Has it been that long Kimberly? Well, God Bless you deciding to take that pen in hand and give us such an amazing gift as "My Louisiana Sky" and all the wonderful, wonderful books my family, friends, bookstore clients, and Pulpwood Queens have read together.
Just this weekend, a new customer asked me, "Do you know Kimberly Willis Holt?" I told her, "Indeed I do." She then just went full blown ballistic on how much she loved your books and couldn't wait for your next one. You see she was a librarian.
My greatest hope for you and your books, my dear friend, is that in this world of book publishing turmoil, your books are not lost in the now going to e-book, digital turmoil.
I just thank God I have all of your books autographed to pass on to my grandchildren. My daughters, Lainie and Madeleine, will make sure that happens too!
Your biggest fan and friend!
kat
The Pulpwood Queen

Great post. I enjoyed hearing about your path. I'm in the throes of rewriting what I should have fixed earlier, but of course I didn't trust my gut.

Oh, Kathy, when I think about how our paths have crossed over the last 20 years, it's truly magical. Thanks for being a part of my journey.

Travis, there are times I'm tempted to not listen to that little voice. I'm not perfect. I sometimes ignore it and when I do, I regret it. And as far as rewriting is concerned, I think time plays a huge factor. Often we have to step away to see clearly. Time is a writer's best friend.