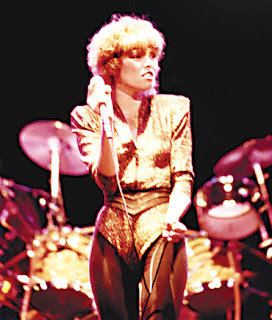 Author Karin Gillespie reveals the twisty, whisky-sodden road that led her to become a writer.


If I wasn’t a writer, I’d be a rock star. I’m good at head whipping, sneering, and drinking Jack Daniels straight out of the bottle.

Before I was a writer, I wanted to be an actress. I’m gifted at drama, especially histrionics. But I was too scared to move to LA and eat ramen noodles.

If you’re under 25 and reading this now, here’s my advice for you: FOLLOW YOUR DREAM! Don’t wait until you’re almost fifty and have developed expensive taste in red wine which precludes you from EVER slumming again. Truth is I can’t even stomach Woodbridge wine much less Ripple or Boone Farms so, regrettably, no more slumming for me. I curse the day I had my first taste of a twenty-five dollar Pinot.

Instead of becoming a hideously famous movie star, I went to community college. I chose to major in psychology because I was crazy. Mainly I hated being in my own skin even though I looked like Kate Hudson (see pic below)

Actually I STILL look like Kate Hudson thanks to some very clean living. (Except for the Jack Daniels.) In fact, the photo above was taken two weeks ago. Please. Don't hate me because I'm beautiful.

My life as a beautiful person


Once I got my sheepskin I worked in a travel agency. The pay was a pittance but as a travel agent, I was able to go on glamorous excursions called FAM trips. FAM stands for “familiar.” As a travel agent, you familiarize yourself with certain destinations so you could make informed statements like this: “The topless beaches of St. Tropez are titillating!” or “Refrain from ordering the monkey soup in Sri Lanka.”

As a travel agent, I trotted around the globe like…well…a globe trotter. And I’d always get first-class upgrades. I lived like one of the beautiful people even though I was only making minimum wage and the video player in my apartment was mine on a rent-to-own plan.

My selfless career as teacher

Things went south in the travel industry and I had to find another job so I decided to be a teacher for three VERY noble reasons: June, July and August.

I taught special ed at a rough inner city school and was assaulted three times. I’m now writing a book about my experiences called “What the Hell Was I Thinking? I Could Have Been Killed. I’m Lucky I’m Not A Little Blonde Oil Spot.”

Years ago, as I contemplated leaving the School From Hell, I said to myself: “Self. You read a lot of books. Why not write one?”

That’s my motto. I choose jobs solely on their cushy factor. Working in PJs and making up stories is about as cushy as it gets. Also you can have any job you want via your writing. I could be a forward for the NBA if I wanted to and I’d never have to leave my office, break a sweat or cover my arms with lurid tattoos. So I highly recommend writing. It pays at least a dollar an hour, sometimes two and you only have to work 80-to-100 hours a week. And it keeps you very youthful looking as you can see by my photo.


What is your dream job and why? Leave a comment and you’ll be eligible to win a million dollars or your choice of the NY Times Bestselling novel Little Bee by Chris Cleave or an autographed copy of The Girl Who Fell From the Sky. I’ll toss a coin to see which one you get. Winner will be announced on Sunday.

Sounds just exactly like my life. Except I'm not blonde.

I went freelance so I could spend all day in my PJs and I'm even considering buying one of those weird "Snuggie" things. :)

Delightful post! I'm still giggling over the hourly wage of a writer. So true! Of course, I could be rich if I had a dollar for every time someone said to me, "If I had time I'd write a little book like yours." Alternatively I might win the million dollars. Send it right away!

I enjoyed your post immensely. You have such a natural flair for comedy! It shows both in your personality and your delightful books.

By the way, thanks for posting my book cover yesterday.

My dream job would be if someone would pay me to just stay home! I'd be much more productive. Love the pay of a writer!

Karin,
Awesome post and guess what? Now I can't wait to post my blog Monday, girl you ROCK!

I really did have the dream job of a teacher like you but I was a K-1 teacher...yep, no assaults here & the summers to recuperate from being loved on too much! I retired 2 years ago but still go back & substitute when I need some hugs!

Thanks for your enjoyable blog entry. I, too, am a retired teacher. My dream job has always been whatever I am doing at that time...otherwise why work at any job? My main jobs have been teaching in private, parochial, public and museum schools. I rarely had one job at a time my entire life. My first job, besides being a "student", was working in the elementary school cafeteria when I was in sixth grade. This job continued into seventh and eighth grades in order to eat a hot lunch every day. When that was no longer my "dream" job in ninth grade, I quit! That has been my way of dealing with work and jobs my entire 50 years of having jobs. If it was no longer a "dream", I left and moved to something else. I wrapped presents at a "dime" store when I was in high school eons ago. I sold shoes and was an executive secretary through college. I have directed a mother's day out program, worked as stay-at-home mom and neighborhood caregiver, presented teacher workshops, tutored, worked as a Kindergarten level religious education developer and coordinator, began a preschool and wrote the curriculum and taught three and four-year-olds. I have taught hundreds of students in classrooms, usually 20 - 24 at a time. Then I moved to 20,000 a year as the planetarium assistant director at our local science and history museum.I have had a rich and fulfilling life of "dream jobs". I wish the same to all who are just beginning the journey. Make each job your personal "dream job" OR move on and find it at another turn in the road.
Karen J Massey

My dream job would be (a successful) literary agent. I love bringing people together who have something to offer each other.

Michelle stole my answer, so I'll say personal assistant to Jimmy Buffett. Love his music and books, enjoy traveling & sampling frozen margaritas all around the globe!

Karin, you're very funny & I'm a big fan of the Bottom Dollar series.

The winner is Lyn In Texas. Email me at Kgillespie@knology.net and let me know which book you want and where to send.

I love this...made me laugh. Thank you, Karin.