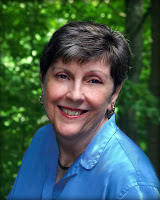 The title of today's blog is a frequent quote of my husband's when people ask him what it's like to be married to a writer--particularly one who for twenty years regularly killed people for fun and profit.

Maybe Bob is thinking of the days when he was leading "creative divorce" seminars and left books with titles like Growing Through Divorce on the coffee table. I countered with How To Murder your Husband and Undetectable Poisons.

Or maybe he is remembering the time I took our three-year-old on a search through Chicago streets, saying, "I've just got to find a place for another body." Barnabas pointed to a blue dumpster. "Dat would be good." He was absolutely right--it appeared in Murder at Markham.

Or maybe Bob is recalling the afternoon our younger son overheard me on the phone talking to my brother-in-law, who at that point was in the Army Corps of Engineers. "Who was that?" David asked. When I told him, he asked, "And what was he telling you?" "How to blow up a boat." David shrugged. "And we do need to know that, don't we, Mother?"

There is the story told by one of my husband's former parishioners, a woman married to a doctor who had given me instructions on how to poison somebody in an alcoholic beverage. I couldn't remember whether he said I'd need one pill or two, so I called early before he left for the hospital. The parishioner later told the story: "The phone waked us and I heard John say, 'Oh, hi. Well, one might do it, but if you really want to kill her, give her two.'" I did, in Deadly Secrets on the St. Johns.

Or maybe Bob is remembering how, when we'd moved out of town and I came back to Atlanta to research Death of a Dunwoody Matron, I asked the friend who had been best man in our wedding to accompany me when I had to visit a strip club one morning to interview the house mother.

Or maybe Bob is just reflecting on the fact that a writer's life is never predictable. Once I am in the zone of a story, I live in two worlds: the world where he is and another world inhabited by people he cannot see who move around spaces he does not inhabit. One of his memorable quotes is, "Writing is not a profession, it is an obsession." It consumes not only the writer but the family.

For instance, there was the "family camping vacation" we took out west one summer, when the family not only had to entertain themselves while I did book events in every city we passed through, but while we camped in Bryce Canyon, Utah, I had to rise at pre-dawn to do a live radio show for comuters in Indianapolis via a pay phone on the campsite store porch.

Or there was the Sunday I was on my way to church and realized that my sleuth's husband was packing the wrong clothes to take on a fishing trip in Did You Declare the Corpse? I was so horrified that I had made such an error and so engrossed in figuring out what Joe Riddley would take instead that I never noticed the man ahead of me had stopped for a left turn. Bob wasn't exactly persuaded that "I was working out a plot" was a valid reason for rear-ending another vehicle.

He's been a good sport these past forty years, though. He has patiently put up with late dinners and frequent suggestions, "Why don't we just eat out?" He has kept small children and grandchildren while I traveled, and helped me work out numerous plot tangles (His usual suggestion is "Why don't you put in a car chase?" which is probably why I have too many of them.) And along the way he has gotten some perks: he's eaten in elegant homes for literary dinners, stayed in beach hotels and mountain cabins while I spoke at conferences, and has enjoyed delightful conversations with a lot of writers who visited our home.

So far he hasn't thought this life was crazy--he just thinks it's "never dull." Don't anybody enlighten him, please!

Patricia Sprinkle's latest book is Friday's Daughter,  a novel that answers the question, "What does a woman do when her dreams disappear?"
Posted by A Good Blog Is Hard to Find at 11:57 PM

Great post1 Thank goodness you only kill people in print. You do only kill them in print, right?

I've just downloaded iStripper, and now I enjoy having the best virtual strippers on my taskbar.