The Writer's Life For Me by Jackie K Cooper 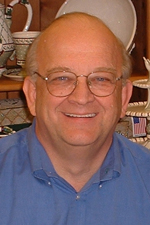 Behind every great man there is an even greater woman, and behind every great writer there is an even greater supportive partner. Now I am not a great man or a great writer but I do believe the thoughts conveyed in those words. In order to have any success as a writer you have to first have someone who believes in you. At least that is the way it has always been with me.
Before I met my wife I did some dabbling in writing but that’s all it was – dabbling. It was only after I met her that I started submitting articles to newspapers, magazines, etc. She was the one who encouraged me to pursue my love of entertainment by writing reviews. Now does she love movies, books, plays, TV and other forms of entertainment like I do – no. But she loves me and she knows how much I love it all.
After I had been writing reviews for a while I began to spread out into the world of columns. I wrote an entertainment column, a TV column, a book column, and eventually a “personal column.” The “personal column” meant I wrote about my life. Now my wife is as private a person as you will ever meet. She opens up only to her very best friends. She certainly doesn’t enjoy having her life laid out in print, and a personal column does just that.
After the column phase ended I decided to turn some of my “journals” into books. That meant that my family life became fodder for my stories. Once again she was not thrilled with my career plans as they involved her. My oldest son JJ wasn’t either. Luckily my youngest son Sean ate it up. I at least had an ally.
I have written six books so far and all of them have primarily dealt with my family. How has my wife done with this? Well she hasn’t been happy all the time, but she hasn’t been upset about anything either. She has accepted the fact that I write. I have also told her I write about the things and people I love. So how could I leave her out?
The one thing she knows is I would never, ever write anything about her or anyone else in my family that was mean or malicious. I do write things that strike me as funny and that sometimes is borderline objectionable, but I don’t think I have ever crossed the line. At least she has never told me I have.
I will say this. She has total veto power over anything I write. If it was something that she said would hurt or humiliate her it would never see the light of day. There is a writing career and then there is a marriage and there is no comparison between the two.
I hope to have a long writing career ahead of me. I hope to have an even longer marriage.
JKC
Posted by A Good Blog Is Hard to Find at 5:18 PM

I agree -- sometimes the best support is just someone believing in your ability. Great post!

Great post, even if the writer lays no claims to greatness. I have a suspicion his wife would disagree with him. I can only envy him his trusty support. Since she has veto power, she must read what he writes. You're a lucky man, but then you already know that.