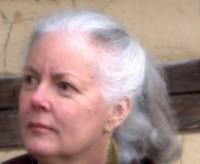 GROWING UP SOUTHERN . . . IN FLORIDA

A reporter is interviewing me. She is from the North and has just referred to my protagonist, Elizabeth Goodweather as a Yankee transplant to Appalachia. Horrors!
“No way!” I exclaim. “Elizabeth’s like me -- Alabama on her mother’s side, pioneer Florida on her father’s. What in the world makes you think she’s a Yankee?” I am incredulous at this assumption. But it’s the reporter’s answer that really stuns me.

“Well, Elizabeth reads the New Yorker . . . and she eats grapefruit . . .and goat cheese. And anyway, Florida isn’t really the South.”

Southern manners prevent me from strangling this interviewer (bless her heart.) At least she didn’t say, “Well, because Elizabeth reads.”

But I find myself feeling ridiculously irritated by her assumptions, particularly as she has just been grousing about ‘stereotypical Southern characters’ in my work – you know, the snake handlers who speak in tongues, the old lady who says ‘hit’ for ‘it,’ the good old boys who chew and spit and wear tractor caps.

Those aren’t stereotypes, I want to say. Those folks are my neighbors. And Florida sure as hell was the South when I was growing up there -- .except, maybe , Miami. I chewed on my annoyance a while after the reporter left. Then I wrote the following. It’s a vignette that is part of a longer unfinished piece – one memory of growing up Southern – in Florida.
STANDING UP FOR DIXIE
I wish I was in the land of cotton; old times there are not forgotten; Look away, look away, look away, Dixie land.

Late October, 1958 -- the Plant High Panthers run out on to the field, their breath huffing visible under the stadium lights. They wear their startling new all-black uniform and the metallic gold numbers and the gold helmets, adorned with leaping black panthers, shine and wink against the green grass. The players, slim-hipped and broad-shouldered, are self-assured and menacing. They look invincible. This morning they were teenage boys: pimply, moody, subject to the whims of parents and teachers, but tonight they are gods.
Bursting through the paper banner held by their handmaidens, the attendant cheerleaders, they thunder toward the home side benches to the deafening roar of the crowd. The opposing players, from some small farming community no one has ever heard of, are pale and weedy; the light blue numbers on their dingy white uniforms almost invisible. The hapless opponents slink onto the field and occupy the away benches. Only a handful of fans have made the long trip from Turkey Creek (can there really be such a place?) and their cheering, a thin, tentative sound, all but inaudible in the packed stadium, is quickly swallowed up by the booming drums and blaring brass of the Panther band.

Turkey Creek’s cheerleaders are unimpressive too -- either heavy bodied and doughy-faced or pale and slightly wormy-looking. Even their uniforms are wrong -- too bulky, like something from a previous decade, and their bobby socks are rolled in great wads around their ankles. (The Plant High cheerleaders have recently taken to wearing their white socks pulled high up their smooth calves and this has quickly become the only way for socks to be worn.)
The visiting cheerleaders are looked over, summed up, and dismissed as of no consequence. For the rest of the evening they will be invisible to Alice and her friends, except at halftime when the Plant cheerleaders, all really cute girls with outgoing personalities, will hurry across the field carrying trays of Coca-Colas to their opposite numbers. The Plant cheerleaders will stand and make small talk with well-practiced Southern hospitality and fixed Miss America smiles, while the visiting cheerleaders grimly down the watery soft drinks. Finally the host cheerleaders will wish the lumpish visitors good luck, y'all! and run back across the field, exchanging snickering comments about the general tackiness of the girls they have just honored with their attention.
The home bleachers are full as usual, with students and families from the surrounding middle class suburb. Plant High (named for a Yankee developer whose railroads and steamships opened up Florida) is the second oldest high school in Tampa, the same one Alice’s parents and the parents of many of her classmates attended, but it has grown to an unwieldy size, almost two thousand students in three grades. In 1960, Alice’s graduating class will number 758 souls, white and Latino. Integration is years away and, as yet, inconceivable but in the following year a new high school will open, siphoning off excess students. And soon other things will begin to change.

On this October night Alice sits with a group of her friends, all girls. In front of her a senior girl languidly pulls her hair into a French twist, all the while talking to a boy on the bleacher below her. Alice is ravished with the senior’s ease and assurance and the graceful lift of hers arms. She studies the other people around her: some couples are sitting so close to each other that they might be Siamese twins; others, those whose status of “going steady” is marked by a class ring on a very long chain around the girl’s neck, seem more casual, hardly noticing or touching one another. Conventional wisdom says that these non-touching ones are the couples who are screwing.
On the track that surrounds the field the cheerleaders – these chosen ones who on game nights seem somehow more alive than ordinary mortals – swing into a clapping dance routine as the band belts out the theme song from “Peter Gunn.” The cheerleaders are totally in the moment now -- untiring, fed by the driving beat. The spectators clap, bobbing their heads and moving their shoulders in time to the music which goes on and on and on. Alice is clapping and bobbing with everyone else. She is totally uninterested in football (it will be several years before she understands the significance of downs and even this knowledge will do little to increase her appreciation.) But Alice, like most of her friends, is there because on Friday nights it is, so to speak, the only game in town.

The PA system crackles: And now ladies and gentlemen, please stand for our national anthem. The stadium lights dim and the spectators stand. The parents – veterans and survivors of World War II, they who will come to call themselves the ‘greatest generation’ – come to their feet eagerly, proud of their country and their flag.
The students stand up more slowly, somewhat grudgingly. Patriotism is not cool. It’s something they learned about in eighth grade Civics but it is not something many of them actually feel. The players all have their helmets off and stand, more or less at attention, facing the flagpole at the end of the field where spotlights capture the fluttering red and white stripes as the ROTC honor guard raises the flag. The cheerleaders too are ranged in order, their right hands laid flat just above their left breasts, their faces solemn, eyes wide with conscious emotion. At last the flag reaches the apex of the pole, a fortuitous breeze catches and unfurls it, the anthem comes to an end, and the crowd cheers perfunctorily and sits down.

A moment passes and the rousing sounds of another anthem demand attention. There is no announcement, no call for respect, but as the bouncy strains of “Dixie” fill the night air, the students stand up unbidden, even eager. Alice and her friend Mary look at one another, half-humorously oh well, here we go again, dragged to their feet by some in-dwelling rebel pride. They stand in the cool air of an October night in Florida, a Southern nation, conquered, but not defeated .

Vicki Lane, author of the Elizabeth Goodweather Appalachian Mysteries from Bantam Dell, draws her inspiration from the past and present of rural North Carolina where she and her family have tended a mountainside farm since 1975.
Dark-edged psychological suspense, the mysteries are set in the present day Appalachians where old ways and new residents are often caught in an intricate and sometimes deadly dance. Lane's work has been praised for authentic dialogue, evocative detail, and rich, clear, intelligent writing that captures the essence of the Carolina mountains and their people. www.vickilanemysteries.com http://vickilanemysteries.blogspot.com/
Posted by A Good Blog Is Hard to Find at 10:32 AM

Vicki - What a terrific piece! I love the story about the reporter, bless her heart. Bring her back - we'll take turns strangling her AFTER we've driven her around these gorgeous North Carolina mountains and maybe, if she can act nice, introduced her to some of our wonderfully unique mountain neighbors who are exactly how they want to be, living the lives they want to live. But I especially love this wonderful piece that the interview nudged you into writing. Lovely!
and I will see you in Baltimore! Can't wait!!
Kaye

Thanks for stopping by, Kaye! And by the way, over on my (almost) daily blog http://vickilanemysteries.blogspot.com/2008/09/growing-up-southern-in-florida.html are some pictures to go with this post -- Vicki all dressed up for the big Homecoming game. In wool, in 85 degree heat.

What a lovely, stirring story about the high school football game! Thanks for treating us.

Plant City, named for Henry Plant: railroad baron, contemporary and competitor of Henry Flagler, who was "civilizing" the east coast of Florida. I haven't thought about that era of Florida's history in quite awhile.

I acquired my very un-Southern accent while growing up in Ft. Lauderdale, in the 60s, surrounded by retirees from New York, New Jersey, Chicago, Canada, and Michigan as well as refugees from Cuba and Haiti. Throw in the smatter of Florida Crackers like me, and that's the derivation of my accent.

Where do all these ignorant reporters come from? They must be clueless about what Davie was like. Davie, just to the west of Ft. Lauderdale, was right around the corner from Nova High School, where I graduated. Davie was where you went to eat grits and buy real cowboy boots. No bagels in sight in Davie, but plenty of Confederate flags waving. At one time, Davie had the highest Ku Klux Klan membership for any town in the United States.

From what I hear, Davie is now filled with SUVs, Starbucks, and soccer moms. I doubt there's any trace of the South lingering in Davie.

Hey, Suzanne -- I think that when I was growing up Florida had more cattle than Texas -- and yes, I remember the special store I went to to get Levis -- which weren't worn by most folks back then.

I really loved that Old Florida.

That's some fine writing lady. And yes, Dixie , from one florida girl to another, is still our anthem. I was newly married and standing with my yankee husband in Atlanta on stone mountain when they began to play Dixie during the festival of lights. Quietly and respectfully all those in attendance began to stand as Elvis belted out the trilogy. My husband leaned over and whispered I think these people need to remember who won the war. I said, "Honey, I think you better remember who you're married to" Full of all the southern pride such a moment might muster.

Thanks so much for taking time to share. And to take me back.

Enjoy your Florida 'native' pieces - even when you are writing 'southern' your writing rings true for '50's high school experiences. Can remember the contrast between city schools and teams and country ones, etc.

Don't let a few unfavorable comments get you down - many appreciate your work.

Thank you, Liz and River!