Crumpled Pages: What is the modern writer's waste-basket?

by Karen Harrington, author Janeology
A few weeks ago, I caught an interview with writer/screenwriter Aaron Sorkin on The View. He said something about his writing process that I’ve been mulling over ever since.
He told Barbara Walters that “because he can no longer rip a piece of paper out of his typewriter and crumple it up, he uses the shower as a way to jump start his mental reset button.” In fact, he went on to state that he often takes six to eight showers a day while he’s writing. Watch the entire interview here. 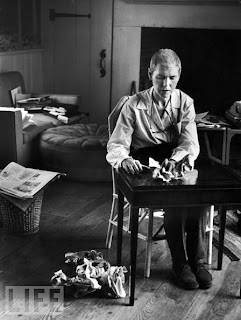 This is striking to me for many reasons. The first is that I’d listen to any advice from Sorkin because he is arguably one of the most gifted screen-writers working today. Is his shower jump-start process a good idea? Maybe so. The proof is in the writing and his success. (I would love to conduct a non-scientific experiment on writing and showering - though as the mom of two young children, I'm not guaranteed even ONE shower per day.) I do give myself the luxury of vacuuming after I've finished a scene. Yes, I said vacuuming. I like to do it and it's one of those things that is good for stretching out the body after you've been in the writing position for an hour.
But the second point about his statement speaks to the modern writer's lack of type-rip-crumple-toss ritual. Fifty-plus years ago, writers expressed a physical act between their fingers and the page. You could send a bad page to a trash bin, giving it a defiant “take that you lousy prose. You are not even worthy of remaining on my desk!!”
But with our slim little computers, are we modern writers handicapped by this lack of physical exchange with our bad pages?
Think of that Seinfeldian scene where Jerry tries to angrily hang up on someone, only to be defeated by the meek gesture of pressing a button. It didn't really send the person on the other end a signal, did it? The same is true for writing on a computer. If you're like me, it's not satisfying to drag a piece of work into your the trash icon on your desktop. It is a very gentile act and you only hear a simulated paper crumpling sound.
So I ask - what do we do with our bad pages? Where do they go? How do we trash them – even figuratively? Do we still have a ritual for angrily deleting our lesser words?
When I recognize something isn’t working, I have no problem deleting it, though it has taken me years to get to this point. I cut-paste chunks of writing to another file called “Cuts: Title of Project.” That way, if there was something in it I want to return to, I can search that file. I finally have the courage to prune the work, knowing the branches will grow back if they are needed. For years, I was scared of deleting whole sections. Now, I see it for what it is – making the work healthier by generous use of the delete key. When I get really frustrated with a scene, I have been known to highlight the entire thing and hit delete and yell at my keyboard.
Still, I haven’t experienced the rip-crumple-toss and can’t help but wonder  - would it make any difference to the quality of writing?
What about you? Do you have a ritual for deleting bad pages? Do you have your own “jump-start” ritual like that of Aaron Sorkin?
You can find me pondering more thoughts at my blog – Scobberlotch.
Happy Trails!
karen harrington
www.karenharringtonbooks.com
Posted by A Good Blog Is Hard to Find at 9:22 AM

What a clever post, Karen, I hadn't thought about that. I edit with a hard copy so those marked up pages get tossed but not crumpled.

You're right - when we do an edit on the printed page, we do get our hands on the pages. Thanks for your comment!

I do what Karin does, but I don't crumple them because they take up too much room in the trash can if they're crumpled. Maybe that's a sign of an obsession that's slowing me down. Maybe I need to find a crumple-and-toss for the emotional release, if nothing else! Nice post.

I go eat a piece of pie, hahhahha!

If I want that therapeutic feel of the crumple, I select the text and hover my finger over the 'delete' key. More so than the crumpled paper in the trash, this is finality on a universal level. When it's gone, I feel it.

Okay, I think I like The Pulpwood Queen solution! Since this is the season of Paula Deen's (evil) dark rum pecan pie, I will apply your idea and get back to you on how this aids my writing. :)

Ummm, dark rum pecan pie, in the bath, with wet pages of a fellow writer - to inspire those bad pages to oblivion of course!
I actually, seriously miss the paper, the crumple, the click of the keys on the page, and the Pavlov's dong ding of the return bell. Good girl, good going, good girl - another line!

Today, a great article on the demise of the TYPE WRITTEN rejection letter.

The Sorry State of The Rejection letter

It adds a little flavor to the type-writer vs computer discussion.

Karen,
I like to print and edit and then I SHRED. The sound of the shredder is loud and seeing what it does to a page or even to those unwanted bills or credit card offers gives me some level of pleasure. I have tossed them in the fireplace, but in South Georgia, there's no need for a fireplace, except maybe one month out of the year.
The pie sounds tempting, though, and I think I'll check on Paula Dean. I don't recall seeing that one last time I was over in Savannah.
Niles

And just so you all will know, perhaps Karen, you sent this to me, but there is now a revamped typewriter that can be hooked to your pc so you can type your words and hear the click, click, click on the page as it types this on to your computer screen. I'm so OLD SCHOOL, I love it! Oh, and I collect ole typewriters too!