The Beauty and The Risk

There is a light that sharpens the hunt during darkest winter, a delicate radiance belonging as much to the earth as to the sky.  After dawn, it clings to the trees like some corporeal messenger.  Remember the stark reality of cold possibilities, it says, black memory, the frozen echoes of hollowed-out veins beneath the ground….

Nature plays a pivotal role in the Pavlicek novels.  Former NYPD detective Pavlicek is both a private investigator and a licensed falconer.  I have often said he has one foot in the mean streets and another in the woods, which can turn out to be a pretty mean place itself, at times. 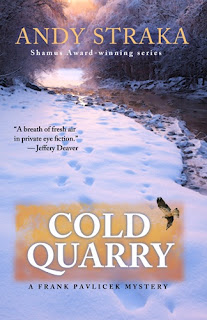 Part of the allure of falconry is experiencing the raw beauty of nature first hand.  There is so much to write about in the wild, so much to appreciate and to work to preserve, but with great beauty there also comes great risk.  I have recently experienced this for myself.

As many of you know, my research into falconry for the Pavlicek novels eventually led me to pursue the sport myself.  Two year ago this summer, one of my teenage daughters and I drove about seventy miles north of where we live in Virginia to the home of a falconer acquaintance to pick up my new hawk.  He was a four-year-old Harris Hawk.  My daughter promptly dubbed him “Harris Potter.”

“HP”, as I soon came to call him when hunting with him, was not my first falconry bird.  During my apprenticeship I had also flown two red-tailed hawks and a kestrel, all of which I trapped from the wild and eventually released.  But I knew I was in for something special the first time I flew HP.  He was a breeze to handle, he “followed on” with me flying from treetop to treetop as if we’d been together for years, and took to game without any prompting whatsoever.

Harris hawks are desert birds, native to the Southwestern US and Mexico.  They have one especially redeeming characteristic as far as falconers are concerned.  Unlike other hawks and falcons, they live and hunt in family groups.  Consequently, Harris hawks have developed a social, pack-like mentality.  In a television special about them National Geographic called Harris hawks “wolves of the skies.”  This same pack mentality is what allowed humans to domestic dogs, and, as a species, Harris hawks take especially well to falconry.  They come to view the falconer and others in the hunting party as other members of their “pack.”


Not only was HP the best trained bird I have ever had the privilege to fly—owing both to his nature and the skills of the falconer from whom I’d acquired him—he was also a fearless hunter, throwing himself with reckless abandon at large prey such as rabbits and squirrels.  He seemed especially drawn to squirrels, which can be feisty, even dangerous prey for a twenty-two ounce hawk.  We took our share of squirrels and other game during the two seasons we were together, enough to keep us in the hunt, but it was the beauty of his stoops and pursuits I will remember above all, and if we came home without bagging any quarry it was invariably my failure and not the hawk’s.
With this past hunting season coming to a close and spring upon us, I recently took to flying HP for exercise alone and begun fattening him up once again for his annual “molt” or change in plumage.  Then, as dusk was closing in one night a couple of weeks ago, he was attacked through the roof netting of his protective enclosure by an owl.

It is a little unclear exactly what happened next.  The enclosure kept the larger attacker from getting at HP and attempting to kill him, which was the nesting owl’s intent, but unfortunately she must have somehow been able to slip a talon through the web of the roof and grab a wingtip as HP either rose to defend himself or flew down from the top of his wire.  I came outside later that evening to find my bold hawk staring at me with a fractured wing.  The owl returned a short while later to attempt to finish the job, but by then I’d already removed HP to a different location.

I rushed him to the aviary specialist veterinarian and eventually to the outstanding vets at the Wildlife Center of Virginia, and, after x-rays under anesthesia, the prognosis was clear.  HP needed surgery.   He would live to make a great education bird in a zoo or raptor rehab center somewhere, but tragically, he would never fly again.

I still find it difficult to convey the extent of the shock and sadness that came over me that day.


There is an old saying in falconry. . .There are only two types of falconers: those who have lost birds and those who are going to lose birds.  We all know nature can be unforgiving, but to have the privilege of working with such a magnificent hawk as HP and to lose him, not while on a hunt or flying him, but in such a freakish manner, has been a difficult pill to swallow.

The good news is though HP is gone from my life, he is not gone for good.  I immediately donated him to the wildlife center and the veterinarians there report that, true to his nature, he came through surgery like a pro and is busy rehabbing in preparation for transfer into an education program.  I’ll be able to visit him, and I’m sure he’ll give enormous pleasure to the many people who will be able to see him and learn more about him.


I hold no animosity toward the owl.  It’s nesting season, and she was simply protecting her own; she must have somehow viewed HP as invading her turf.  Though I have kept all of my falconry birds in this same enclosure with no problems whatsoever, I am in the process of adding heavy gauge steel hardware cloth to the roof structure of the enclosure to prevent such a thing from happening again.  I also plan to acquire another Harris Hawk this summer and begin hunting again in the fall.

Still, I can’t help but continue to grieve over memories of blue skies and days together with Harris Potter.   Another chapter has been added to my falconry experience, this one of sorrow and regret.  Hawks are meant to fly, and somewhere in the darkness of the wildlife hospital tonight, well-cared-for as he is, a brave heart is down. 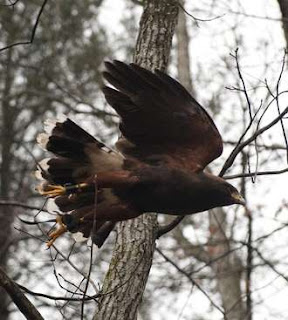 
Publisher's Weekly has featured Andy Straka as one of a new crop of "rising stars in crime fiction." His books include A WITNESS ABOVE (Anthony, Agatha, and Shamus Award finalist), A KILLING SKY (Anthony Award Finalist), COLD QUARRY (Shamus Award Winner), KITTY HITTER (called a "great read" by Library Journal), and RECORD OF WRONGS, hailed by Mystery Scene magazine as "a first-rate thriller."


Also a licensed falconer and co-founder of the popular Crime Wave at the annual Virginia Festival of the Book, Andy is a native of upstate New York and a graduate of Williams College where, as co-captain of the basketball team, he "double-majored" in English and the crossover dribble. Current projects include a soon-to-be released "Adult Fiction for Teens" edition of A Witness Above incorporating a falconry primer for teens published by Cedar Creek Press and a recently completed sixth novel. Andy is also at work on his Masters Degree in Creative Writing. He lives with his family in Virginia.

Beautiful, Andy. Just breath-taking. Your word images are even more striking than the photographs.

This won't really have effect, I consider like this.

Great post andy,
I enjoyed a lot after reading this.
Its Awesome.