We've Got a Lovely Bunch of Coconuts

A good spring day to y'all. Contrary to popular belief we do have a noticeable spring in the southern tip of Florida, although it's not marked by all the normal natural occurrences common in places farther north. One way I know it's spring is when I hear a knock on my door ...


... I answered. The small Asian woman pointed to the  the street and said, "Coconut? Coconut?"

She looked at me quizzically, then turned inward, searching for what to say next. "Ah!" she exclaimed. "No. Me please have coconuts?"

"You want my coconuts?"

"Yes. Please me have coconuts."

There was a battered white van in the street, driven by some man … and not a ladder in sight. My coconut trees stretch and arch upward for nearly thirty feet. That would put about 25 feet between this woman's head and the fruits she desired.

"No. How can you get them? Do you need a ladder? I have an extension ladder."

"So I can have coconuts?"

"Uh, sure," I said ... and you would have done the same thing if you've ever tried to hammer open one of those damn things. Honestly, we have so many coconuts on Coconut Drive that we don't know what to do with them. It's one of those things you get jaded about very quickly after moving to a place like this. They become something to dodge while driving down the street. Or something to throw into the river before hurricanes so they don’t become airborne missiles.

The woman smiled and waved at me and scampered out to the street. She then smacked the side of the van, and the young male driver emerged. He was lean and young and wore nothing but a pair of cut-off blue-jeans. And, honest-to-God, here's what happened next:
He pulled a long machete from the van, put it between his teeth as would a pirate. And, then, with an unceremonious hop, jumped upon the tree and began to shimmy upward as if it were a thick rope. He reached the top in seconds.

Meanwhile, the woman reappeared with a stained, mildewed sofa cushion, and as he hacked away upstairs she stood beneath, trying to catch the coconuts as they dropped.

I came out and watched with fascination, and I leaned into the van for a look. It was stuffed, floor to ceiling, with green coconuts. Obviously, this was one of their final stops of the day. And I realized with irony that there was a good chance I'd be paying $3.46 for one of these at the supermarket that next week.

Now imagine the gravity of this situation: Coconuts falling thirty feet from the ground, right toward your head. The sheltered, pampered Anglo-parent in me wanted to yell, "Stop! Stop! Someone's going to get hurt … or poke an eye out."

Evidently, something did happen shortly after that because when they returned six months later she was wearing a bicycle helmet for the task.

"Coconuts?" she asked me.

"Of course," I replied. And I patted my head, pointed to hers, and nodded in approval. 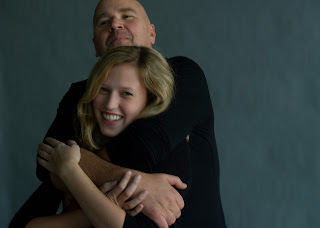 This is me and my daughter Haley. Currently am working on an empty-nest memoir, which is proving to be the biggest challenge I've ever had as a writer. 'Sorry this one is taking so long, but it'll be worth it in the end, I promise. Until then, you can catch me on facebook and twitter and at my blog at adhudler.com. I'll also be teaching at the Kentucky Writers Workshop April 15 and speaking at the Southern Kentucky Book Fest April 16.
Posted by A Good Blog Is Hard to Find at 4:23 AM

Now that made me laugh. Thank you for sharing a very amusing story.