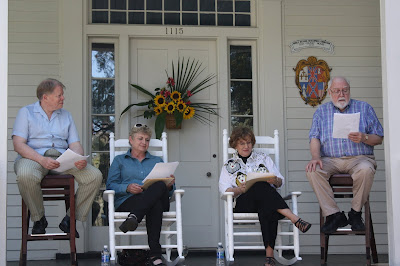 This weekend I participated in a “porch reading” of a one-man play that Broadway actor Joel Vig is putting together. The subject is Eugene Walter, a Mobile writer who won the Lippincott Award at the age of 26 for his novel, The Untidy Pilgrim. Poet Sue Walker, Joel, professor John Hafner, and I read the play from the porch of the Cox-Deasy historic home on the Oakleigh Museum grounds as part of the three-state Literary Trail of events that ripple across the South each spring. 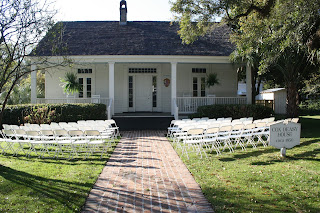 Eugene, a man I adored, once lived at the Cox-Deasy.

Joel took Eugene’s words and blended them into a short version of his play that captures Mobile in a way uniquely Eugene. “Down in Mobile they’re all crazy because the Gulf Coast is the kingdom of monkeys, the land of clowns, ghosts and musicians, and Mobile is sweet lunacy’s county seat.” This is the opening line of Eugene’s novel and Joel’s play.

Eugene would be 90 this year. He died at the age of 78. It is just now that Mobile is beginning to recognize the literary treasure that lived in the midst of the city, for Eugene was Mobile’s strongest supporter. But he was also an out-spoken critic of many things that are now proving what a wise man he was.

Our topic for the blog this time is about how the seasons affect us as writers. There can be no better example than Eugene. He lived for many years in Europe, where he worked with Fellini, wrote, painted, and cooked. He was an extraordinary chef (he has several cookbooks, including one for Time/Life on Southern cuisine) and an avid gardener. He was completely in touch with the seasons, the day-to-day workings of insects, mice, the small creatures who are part of our eco-system and who many want to eradicate but which Eugene championed.

In his musings, Eugene talked about how the advent of air conditioning was destroying the South of his childhood. And mine. I grew up in the ‘60s, and we had a window unit to cool the kitchen for my mother to cook and for meals. Otherwise, we had an attic fan, which meant good screens on windows because we opened up the house and let the fan pull the cool night air over us.

The nights of my childhood I fell asleep to the sounds of crickets, moths batting against the screens, night birds, and the occasional slish of car tires on the paved road in front of our house. The little town of Lucedale slept with only a latch on a screened door.

Air conditioning, like television and now computers, have moved our society toward isolation. We live insular lives. Our emotional experience is achieved not through community, or at least not the community of a street or neighborhood or region, but through electronic devices that emphasize our individuality, not our commonality.

We drive in our air-conditioned cars (and god knows in the Alabama humidity, I love my a.c.).

Yet I still have one foot in the world that Eugene loved, a world that I feel slipping away so quickly. I am a farmer. The weather—the seasons—dictate my daily life. This past winter was very hard. My older horses suffered, so I did, too. 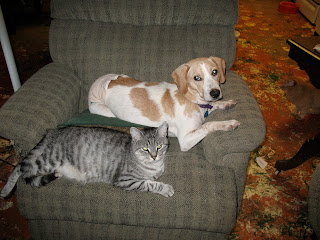 My writing routine depends on the weather, the season. In the summers, I write in the middle of the day, when it is hot. The horses are under fans, the dogs and cats are lounging on the sofas in the a.c. (yes, they love it too!) and I am at my computer. I do my farm work early in the morning or late in the evening.

In the winter, this is reversed. I write early and late and do my farm work in the middle of the day when it is warmest. Of course, there is the 10 p.m. hot mash session for the horses when it is bitter cold.

This spring break, my friends Joe and Perry came out to the farm with heavy equipment and dump trucks filled with clay and sand to work on my erosion problems. My plans to write for the whole week I was out of school were abandoned for the necessity of doing this work while the weather was good.

It is the weather that dictates my life. It is the blessing and curse of those of us who still are linked to the land in a way that few people know today. But in a very strange way, it feeds my spirit. Without this bond, I would not be the writer I am. My senses are attuned to the natural world, and I believe that makes my characters and my settings more powerful, or at least I hope so. 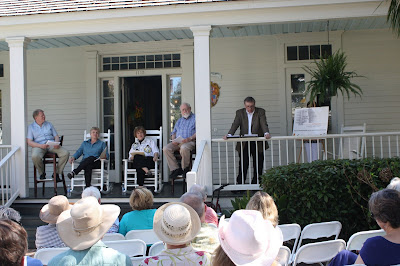 Eugene said that air conditioning would be the death of the South, and he has been proven right in so many ways. The days of front porch visiting, story telling, the courtesies and manners of that era when people lived and relied on each other to survive—those have slipped from us.

A native of Mississippi, Carolyn Haines lives in Southern Alabama on a farm with horses, dogs, and cats. She has a family with enough idiosyncrasies to give her material for the rest of her life and a bevy of terrific friends. Follow her on Twitter, Visit her on Facebook and her website and be sure to sign up for her newsletter.
Posted by A Good Blog Is Hard to Find at 2:55 AM

I remember summers sitting on my granny's front porch cleaning beans and shucking peas with her while she told us stories. We didn't have a working farm, but we had a huge garden, horses, a couple of cows, chickens, a goat, lots of dogs and cats. Our favorite place in the heat of summer was the well house since it was the coolest place around. Winter was in the basement near the coal burning furnace. We had our play houses in both spots. Thanks for bringing my Tennessee roots back to me. :)

I know each generation despairs that the "magic of our childhood" is being lost to the next generations. But I do fear that we have lost touch with the natural world. I think it impoverishes us as writers, and certainly as humans. But what do I know--I'm just a writer.

You have just reminded me that soon,very soon, yard work will be relegated to early mornings and dusk dark! :(
Life in the deep south,the great part is that right now everything is blooming and beautiful and we have "kissed the last" of winter! :)
Love that the land is at fault for your wonderful writing, keep it up!!!