Shadow Books: The River of Shared Life by Susan Cushman 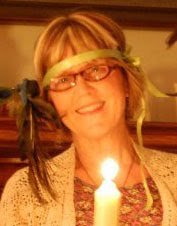 The books on our bedside tables speak volumes—literally and metaphorically—about what makes us tick, as human beings. My husband is a physician and a priest. The books in his pile usually include scientific and theological works, with the occasional novel like Mayflower (about his ancestors) or a nonfiction book like Salt: A World History. A scientist usually reads more for information than inspiration or entertainment.

Glance across to my bedside table—wobbly from three stacks of books in various stages of interest, ingestion, or review—and you’ll find a mix of memoirs (primarily dealing with abuse, addiction, and dysfunctional families) by Mary Karr, Haven Kimmel, Augusten Burroughs, Neil White (In the Sanctuary of Outcasts) and Kim Richardson (The Unbroken Child); gritty fiction, from Southern classics by Flannery O’ Connor and Harper Lee, to contemporary favorites like The Prince of Tides and South of Broad by Pat Conroy and The Help by Kathryn Stockett. Books on spirituality, psychology, and the craft of writing complete the stacks. As an artist and writer, I read for inspiration. As a wounded woman, I read for entertainment, spiritual and psychological healing, and to understand myself and the world that formed me, especially the “Christ-haunted South.”

Recently I came to realize that those are the same reasons I write. And the “muses” for my art—whether I’m “writing” Byzantine style icons for a church or penning personal essays or chapters of my novel-in-progress—are often those same books, and the wounded writers who crafted them. The prolific author, Francine Prose, published a book in 2002 called Nine Women and the Artists They Inspired. Prose cast the role of the muse in a different light, suggesting that “…the human psyche is too complex to derive something so tough and enduring as art from something so fragile and transitory as love.” She offers the following as potential muses: “Nearly anything—geography, ambition, expensive tastes, an abusive childhood, poverty—seems a more probable motivation for making art than the promptings of longing or love.''

Geography can be a muse? Why not? Pat Conroy has his protagonist Tom Wingo say in the opening paragraph of The Prince of Tides, “My wound is geography. It’s also my anchorage, my port of call." Perhaps South Carolina's beautiful forests, rivers and tidal marshes, along with Conroy’s own broken family, do serve as his muses. He continues to mine treasures from his dark past, mastering the art of literary fiction one book at a time. He opens his latest novel, South of Broad, with these words: “It was my father who called the city the Mansion on the River. He was talking about Charleston, South Carolina, and he was a native son, peacock proud of a town so pretty it makes your eyes ache with pleasure just to walk down its spellbinding, narrow streets.”

Making art—that’s the goal, right? I think this sometimes gets lost in the rush to embrace our painful past and heal our primal wounds. There’s a place for that—whether one chooses the sacrament of Confession, the psychologist’s office, or both—but the process of healing shouldn’t usurp the graceful dance of the artist’s brush or the writer’s pen. Not if one wants to create art.

Last September I was a presenter at the Southern Women Writers Conference at Berry College in Rome, Georgia. I read my essay, “Are These My People?” on a panel with two other writers. Our shared theme was “Old South Ideologies.” My muses? The “Beautiful People” at the Neshoba County Fair in Philadelphia, Mississippi… and their conspicuously absent African American neighbors. My co-panelists’ muses were the contemporary novelist from North Carolina, Jan Karon, and the nineteenth century writer from Natchez, Mississippi, Sarah Ann Ellis Dorsey. Talk about variations on a theme! But hey—all muses were welcome!

One of the keynote speakers at the conference was Connie May Fowler, author of several books of fiction and nonfiction, including Before Women Had Wings, which she adapted for film for Oprah Winfrey. Having survived a life of abuse, Connie May encouraged us, as women and as writers, to “operate as an artist first” or your story won’t be successful.” She said that “stories save lives and we must keep writing, but do it as artists and not as confessors.” Excellent point. Anyone can go on a talk show and tell their story of abuse or neglect, but that doesn’t make it art. We have to get up and above the abuse and weave a story that will grab the reader by the heart-strings and not let go until the (hopefully redemptive) end.

How does a budding artist learn to do this? From where doe she draw inspiration and learn the skill? Fowler encouraged all of us at the conference to have a “shadow book”—someone else’s story that “puts you into the river of shared life with others on the journey.” I contend that we need many such shadow books, which is why my bedside table resembles the Leaning Tower of Pisa.

One book which spent many months on that table is Madeleine L’Engle’s Walking on Water: Reflections on Faith and Art. Since L’Engle’s death in 2007, I’ve revisited her books more than once, for inspiration. She’s definitely one of my muses. L’Engle believed in a creative world that had a place for everyone’s art. “We all feed the lake,” she wrote. Even someone as gifted as L’Engle was quick to add, “… other artists teach the rest of us, offering their vision of truth.” None of us should be too proud to stand on the shoulders of the giants.

But not all my “shadow books” are written by giants. Some of my greatest inspiration continues to come from other writers who are just starting out, like my writing group buddies. And those just a little further down the path, the ones who just got an agent to read their manuscript. And the ones who recently got their first book deal and are waiting for publication. But especially those whose life stories contain elements similar to my own, who are finding healing through writing and publishing their stories. 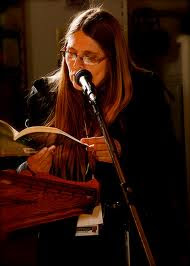 A newcomer to my bookshelf is Allison Hedge Coke’s memoir, Rock, Ghost, Willow, Deer: A Story of Survival. It’s a redemptive story of a childhood filled with rape, but told with beauty and courage. Coke (left) is a mixed-blood native American poet, and one who hasn’t allowed her abusers to silence her voice. The leaning tower continues to grow faster than I can read and shelve those “shadow books.” As I close the covers of one and open the next, I pause to give thanks for this river of shared life in which I find myself and my muses.

What is your shadow book? Which writer (or writers) puts you into the river of shared life? Please leave a comment! (And by the way, thanks to the 22 people who commented on my post of May 27, “Call for Names.” Just to let you know, I settled on “Mare” as the name for the hippie-graffiti artist, and “Cherry Bomb: A Novel” for the book title. I’m having a blast writing the story!)

Susan's essays have been published in The Santa Fe Writers Project Literary Journal (2007 finalist),  First Things: The Journal of Religion, Culture and Public Life, skirt! Magazine, Southern Women’s Review, Mom Writers Literary Journal, and Muscadine Lines: A Southern Journal. Later this year, her essay, “Jesus Freaks, Belly Dancers and Nuns,” will appear in the second volume of All Out of Faith: Southern Women on Spirituality, from the University of Alabama Press. Susan’s blog, Pen and Palette, was recently voted one of 50 Top Creative Writing Blogs by Awarding the Web.
Posted by A Good Blog Is Hard to Find at 10:36 PM

the dim sum of all things by kim wong keltner, tran-sister Radio by Chris Bohjalian, i know this much is true by Wally Lamb, pride and predjudice by Jane Austen. the dim sum of all things i read pretty often because it's light and funny and i can identify with the main character. the other 2 books are mainly just interesting looks into different topics--trangender and mental illness. Pride and Predjudice i like to read because it's familiar. i tend to read mostly fiction because it allows me to just unwind from my day. i'm not a writer or an artist. i like a book that can transport me.

As a writer with few ugly things in a calm past, my shadow books vary with what I've been fortunate to run across, usually by accident and often include stories inspired by the muses of suffering. The most recent is Time Sharing by Richard Krawiec. I return regularly to Wallace Stegner for his balanced, controlled passion and clarity of expression.

I think Francine Prose may not be quite correct because love and longing are inextricably connect to loss--and surely that is an inspiration for me, and I think for others. Very interesting post, for which, Thank you.