Once I tried to set a story someplace other than the South. I really did. I described walking in the snow, kicking at drifts taller than the fire hydrant on my maple tree-lined street. Eating Italian ice and searching the grocery shelves for something my friend called Taylor Ham. But I was living in New Jersey, where I'd lived for 25 years, and it just didn't work.

There's something about Popeye's biscuits and cheese grits, mosquitoes and mimosa trees that speaks to me.

I began writing in earnest when I'd lived in New Jersey long enough to miss Mississippi. When I couldn't find a fig or a fig tree, I remembered my grandmother's tree and visits to my sister's and I wrote about them. When I missed congealed salad and cheese grits and barbecue, I wrote about toting food to funerals and church suppers.

And then a novel for children started percolating in my imagination. And guess where I set it. Mississippi, summer, 1964. I couldn't help myself. The lightning bugs, the swimming pool, the mimosa trees just wouldn't go away.

I've lived in a lot of places, but there's really only one thing that's deep enough inside me to permeate my writing. Someone whose name escapes me- although it must have been a source worth trusting because it resonated and keeps bubbling up- once said that you write about the place deepest inside you and you best write about it when you yearn for it. It might have been fellow Mississippian Willie Morris. When I lived in Boston, I read his book after a local (AKA Boston Yankee) asked me: "Have you read that book by Willie Morris who used to work at Harpers? The one about the fictional place called Yazoo?"

I need to read that book again, with the distance that comes from many years of living North Toward Home. But whoever said it, it's true. We do write best what we yearn for. I feel that way about the South. Even if he needed to get his facts straight and realize Yazoo City, Mississippi, wasn't entirely a figment of Mr. Morris's imagination, that Yankee from Boston made me think about my home as others saw it.

It's not that I don't try to take in everything around me, no matter where I am. Right now I'm dreaming up a new kids' book and it's set in Florida. Florida, right? Disney and Miami Beach and the space shuttles? No. Not Miami, not even the beaches. But rather a place where kids run wild and get into trouble, eat snowcones in the summer, where the blacktop parking lot squishes beneath my character's feet, so hot his shoes feel like they may melt. The part of Florida that's really just small town South.

I set things in places I see in my imagination, and  imagining places in the South is just easier when it's so much a part of you. At least that's the way I look at it.

This July, early in the month when the temperatures were over 100 degrees even New Jersey, I felt right at home. I was hot, but somehow it felt like summers used to be. And just the other day in Baltimore where I once lived and always felt was The South, my friend showed me her shoes, how the bottoms had melted when she walked on her blacktop road. 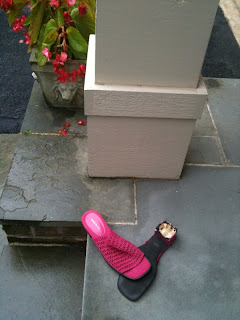 All that summer heat? Roads so squishy you shouldn't walk on them in your Sunday shoes? It didn't surprise me a bit. It had already happened to a character I know.

Augusta Scattergood reads and writes from both Florida and New Jersey, but her heart remains in her home state of Mississippi. You can follow her blog at http://ascattergood.blogspot.com/
Posted by A Good Blog Is Hard to Find at 7:01 PM

That was fun to read... Can't wait for Chase to read the novels!

Hey, Augusta. Enjoyed your post. I'm also from Mississippi.. grew up in Jackson in the 50s and 60s, so I can relate. Great place to be from if you're a writer!

Got to love those Popeye's biscuits. BTW: Best meal in ATL is at the Popeye's in the B terminal at Hartsfield. It's one of the few Popeye's that serve breakfast, and their spicy fried chicken and fried egg on a biscuit is divine.

I can't believe it! I've searched everywhere for a Popeye's that serves breakfast because there used to be one in New Orleans and the bkfst was divine.

I will be traveling to Atlanta soon so great timing. Thanks for sharing.

And, yes, Mississippi= good place to be from.