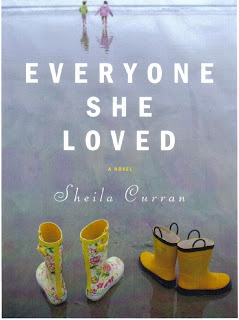 Q and A With Florida Author Shelia Curran

Tell us about your latest release and the inspiration behind it.

EVERYONE SHE LOVED is a story of old money in the New South, legal entanglements, romantic confusions and the unbreakable bonds between four women – and a man.

I got the idea when I was telling a friend about an article I’d written about two little girls who’d lost their parents within a few months of one another. They’d been adopted by their mother’s best friends, a pair of sisters who’d never married or had children. One was a lawyer and she told me that in many states, unless you specifically name a guardian, your children will be taken into foster care. I started wondering then about who I’d want raising my kids if I were to die. I have lots of siblings, and so does my husband, so we’re lucky, but as I was talking about the agonizing process of trying to decide upon your children’s parents in the event of your own death, an even more frightening scenario occurred to me. What if my husband remarried and the woman he chose was super-nice to him but secretly awful to my children? Being a worrier, I thought about how to prevent that from happening. “Maybe,” I said, “Whoever he marries would have to be approved by my sisters and best friends. They’d sniff out a snake in a heart beat.”

From there I came up with Penelope Cameron May, who has more money than God and an imagination that keeps her awake at night. Because she lost her own mother at the age of six, and her grief-maddened father married a deep fried bimbo, big of breast and small of soul, she thinks her husband Joey might similarly fall prey to the advances of a gold-digging wicked stepmother. Her solution? To talk her husband into signing a codicil to her will saying that if her remarries before her children are eighteen, he will have to gain approval from his late wife’s sister and three best friends. Because she’s healthy as a horse, her husband and friends think this request is ridiculous, but she won’t relax until they sign it. The contract gathers dust and its own share of hilarity for several years. Then the unthinkable happens and everyone she loved must find their way without Penelope.

The novel opens two years after she’s gone. Her husband and children have been living with Lucy since the night their mom was killed. Despite the passage of time, the children’s welfare is still in question, especially the eldest daughter Tessa’s, whose eating appears to be spiraling into some sort of disorder. A very attractive newcomer in town appears to offer solutions to all sorts of problems, but she disapproves of Lucy as well as Penelope’s other best friends. Conflicts ensue, complicated by interfering distant relatives, romantic confusion, legal entanglements and the sort of visibility that attends old money in the New South.


How do you go about choosing a setting for your novel? Does it, like New York in Sex and the City, almost play the part of another character in the book, or could the plot be transported to another setting and work?

My setting had to be a small southern beach town for EVERYONE SHE LOVED. Old money in the New South…that sort of thing. And for my first book, Diana Lively is Falling Down, the settings had to be Oxford, England and Arizona.

If your book were to be made into a movie, who could you see playing the lead role?

Tell us why your editor is the best editor ever in the universe.

Because she picked up a nobody like me. Her other writers are Jodi Picoult, Vince Flynn, Brad Thor and Jennifer Weiner. And she took a chance on me! Plus, when I didn’t like the first cover they sent, she actually listened and had the new one made. Plus, she’s got a knack for cutting out superfluous and self-indulgent prose. PLUS, she came up with the title, and I think it’s a gem. It’s short, sweet, and can be understood on so many levels.

Oh, hearing that I was able to give someone a few hours of enjoyment is right up there with the pleasure of having had a great writing day, so lost in my characters that I feel as though they’ve inhabited me. The greatest angst is worrying about the nearly impossible task of getting copies into readers’ hands. I know that once they read me, they’ll buy my next book, but it’s getting them to give me a try that’s so challenging.

If Oprah invited you on her show to talk about your book, what would the theme of that show be?

Who would you pick to take care of your children if you were to die, and what sort of issues might you fear most about another mother raising your kids.

What was your writing journey like, i.e. how did you become a writer?

Accidentally in part, though when I look back on my life, it all fits. I waitressed for years, and wrote simply to tell myself I was at least working on one skill while I wasted my life. I’ve always been a reader, and I just imitated the form I read most at the time: murder mysteries. I wrote two, found agents along the way, but when my novels were rejected by publishers, I assumed they weren’t good enough. So I dumped the manuscripts and started over. Fast forward through children and a day job, all the way to a midlife crisis that coincided with my husband’s sabbatical in England. I finished Diana Lively over there, returned home, threw everything away but the first chapter and started over. A year later, when I had a manuscript I loved, the gods smiled on me and I found Laura Gross. She took a month to read it, and by the end of that time I was sure she’d ‘pass.’ I decided to self-publish, make a movie, keep on writing, and then I got her call saying she loved it. Several months went by while what seemed like thirty publishers rejected it, so again, I assumed I would never ever get it published. Finally, on April 19th, six months after Laura took me on, Susan Allison at Penguin bought it. By that time I was 49 years old and had been writing for 22 years!

What books are on your nightstand?

DREAMERS OF THE DAY, by Mary Doria Russell, THE PRETEND WIFE, Bridget Asher, PEOPLE OF THE BOOK, Geraldine Brooks, THE STORY OF EDWARD SAWTELLE, D. Wroblewski, BONES OF DECEPTION by Jefferson Bass and THE VANISHING ACT OF ESME LENNOX by Maggie O’ Farrell.
Posted by A Good Blog Is Hard to Find at 8:31 PM