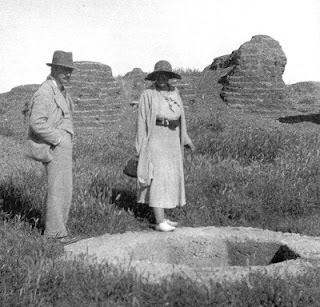 I took a break from cleaning closets – yes, I admit it, the lengths I’ll go to procrastinate when I should be writing really do know no bounds. I decided to treat myself to lunch at a new pizzeria so I could begin reading a new book I’d just gotten. Oh, what a jolly break to the end-of-the-year holidays, to read and not rush. Then I had to disturb all the others who’d come for lunch, causing some to wish they’d chosen another table at which to perch. One nearby couple decided to move to another seat.

I couldn’t help it, though. I started laughing. Out loud. At first, it was just a snicker, but after I read only a few more lines, it turned into an outright snort. Who knew Agatha Christie was so outrageously funny?

Come, Tell Me How You Live by Agatha Christie Mallowan (1946, reprinted 1974) is her memoir of digging with her archaeologist husband Max Mallowan in the Syrian Desert. With the Middle East so much in the news, her tales of that time leap to life with names from the evening news. Her Epilogue was especially poignant; she talks about the war (World War II) keeping them home and how wartime London made her long for the primitive but beautiful digs in remote reaches.
But the start of the book was what prompted my giggles. Was it the jolt of recognition? Her author photos always show her comfortably padded in her English tweeds, solid and accomplished and … grand. How could the grand Dame herself have had the same experiences I’ve had while rummaging through closets?

Shopping for a hot climate in autumn or winter presents certain difficulties. One’s last year’s summer clothes, which one has optimistically hoped will “do,” do not “do” now the time has come. For one thing they appear to be (like the depressing annotations in furniture removers’ lists) “Bruised, Scratched and Marked.” (And also Shrunk, Faded and Peculiar!) For another—alas, alas that one has to say it!—they are too tight everywhere.

So—to the shops and the stores, and:
“Of course, Modom, we are not being asked for that kind of thing just now! We have some very charming little suits here—O.S. [out-size] in the darker colours.”
Oh, loathsome O.S.! How humiliating to be O.S.! How even more humiliating to be recognized at once as O.S.!

(Although there are better days when, wrapped in a lean long black coat with a large fur collar, a saleswoman says cheeringly: “But surely Modom is only a Full Woman?”)

Alas, indeed, to have clothes that one reserved for just such a future excursion come out of the closet looking … Peculiar. And how loathsome to be a size(s) larger than you rightfully should be, despite all the exercise during the holidays and all the resolutions dutifully kept from last year.

Then there was Agatha’s tale of her new Zip traveling bag, which had all the inherent defections she’d feared in zippers, and how long it took to decide what books to carry on the trip, and her husband hanging about wanting to put some of his books into her suitcase because he had to remove them from his in order to fit in the barest number of shirts and underpants and socks.
(Okay, I confess. I’m the one who sneaks books into my husband’s suitcase when he’s not looking. He always has plenty of room. But I know I’m not the only one who spends more time deciding what books to take than what to wear.)

Then Agatha encountered a Turkish border guard who cross-examined her at length about the number of shoes she’d brought on board the Orient Express. Who knew Agatha had a shoe fetish? (Okay, that would be my sister’s and my best friend’s favorite fetish – but who knew it was Agatha’s? She seems so … sensible.)

Is that what’s kept her mysteries so alive, so relevant despite vast changes in the world? That Dame Agatha was really, at the heart of it all, just one of us? True, reading the book delayed me from finishing the closet cleaning, but I eventually gave away stacks of clothes. Other folks will enjoy them, and I no longer have to worry about why they don’t quite work the way I remembered.

I have, however, avoided the mall and any clothes shopping and a chance encounter with a clerk who identifies me immediately as the size I am rather than the size I’d like to be. I’d rather write than face that.

Hope you have a stack of new books to read for the new year – and go ahead, laugh out loud.
Posted by A Good Blog Is Hard to Find at 10:01 PM

Nice blog. I will keep reading. Please take the time to visit my blog about

I gave away so many clothes last month that I gave away many of my suits and shirts by accident. I'm starting over and I like it. I think I'll give away this year. I started Weight Watchers, so I better be down a size. :) Great blog!