Tell Me A Story - Patricia Sprinkle 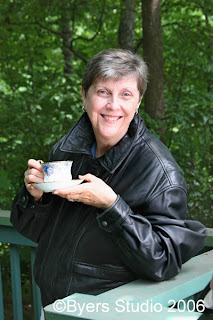 Sorry—I’m sliding in late today with this blog, because it’s the first time I’ve been at my desk in the new year. After a week with my grandchildren, I find myself pensive about children and the desperate need for all of us adults to exercise whatever honest-to-God wisdom we have, born of trial-and-error experience, to provide a better world for our grandchildren and their grandchildren.

I’ve heard that some Native American tribes ask the grandmothers to consider, before a vote is taken, “How will this affect the seventh generation?”

Nationally, I wish we had a somebody delegated to ask that question. Politicians don’t do it—they look at issues only in terms of their next election. Educators don’t do it—they seem to change policy based on the latest crop of Ph.D. dissertations. We need somebody around to demand long-range solutions to problems that plague our society.

The question of the seventh generation haunts me as a writer, too, for increasingly I fear that American authors are interpreting “freedom of speech” not as the right to speak truth to power but as license to titillate, terrorize, or speak trash. We often hear that “Children are different today,” but are children really different, or have we adults simply shaped a new and sometimes terrible world for them to live in?

No matter how often writers protest, “We don’t shape the world, we merely reflect it,” we shape the world far more than any of us are willing to admit.

Over the holidays my husband and I went to see Juno, which has received rave reviews. The acting was fantastic, the dialogue superb, and the setting terrific. The ending, however (which I won’t give away, for you who haven’t seen it), left me wondering, “What does this movie teach teens about consequences and how they can haunt our entire lives?”

The makers of the film might protest, “We are simply depicting the way life IS.” But they aren’t teenagers, they are adults writing about teens—adults who surely have lived long enough to know that consequences don’t disappear over the rainbow once you have found the best solution you can to a serious problem. However, once the story has been told so convincingly, won’t some teens believe that “that’s the way life is”?

Story is one of the most powerful shaping forces in history. Stories of valor, stories of cunning, stories of violence, stories of love. Nations and people become the stories they tell.

My three-year-old grandson climbs into my lap. “Momo, tell me a story.” He doesn’t want just any story. “Tell me about the time Mama and Daddy and I flew to Texas.” He has never been to Texas. “Tell me about tigers in your garden.” As far as I can recollect, I have never had tigers in my garden. I don’t even have a garden.

I have to decide carefully what I will say, because for Joshua, once Momo has told a story, it is true. Do I want that flight to Texas and tigers in the Sprinkle garden to go down in history along with George Washington’s cherry tree?

And so, as I sit down to begin a new writing year, I think about children. Children I know, and children of people who will read my books. How will what I am influence them? How will what I say influence their picture of the way the world is? The post-modern world will tell them that there are no more absolutes, that everything is relative, but having lived over sixty years, I know that while all things may be relative, only some of them are true. I feel a responsibility as a writer to depict the world as I have found it: moral and immoral, sad and funny, full of despair and full of love, and needing all the help responsible adults can give it.

In that vein, the third edition of my CHILDREN WHO DO TOO LITTLE just came out from BellaRosa Press. The book discusses how to build a family team and teach children responsibility as we teach them household skills. It looks at why we adults don't teach them, ways to teach skills as painlessly as possible, and how a failure to learn those skills and responsibility as a child can negatively affect a child's ability to hold a job or stay married as an adult.

I was delighted to receive an e-mail last night from a friend who reads this blog. She had followed a link from Juliana Baggott’s blog to a project which provides books for foster children. Knowing of my own concern for foster children, my friend wondered if she might start a program in her children's school to collect books and raise awareness about the lives of foster children. Thanks, Juliana, for that link!

Like I said, we writers influence people more than we will ever know.

I hope the seventh generation will thank us.
Posted by A Good Blog Is Hard to Find at 12:43 PM