Q and A With Caroline Cousins, collaborating mystery writers

Q. How did the three of you decide to write together?

A. It just sort of happened. About 10 years ago, Nancy was visiting Meg at her then-home in Mt. Pleasant, S.C., over the Christmas holidays and they went to pick up Meg’s daughter who was working as a tour guide at Boone Hall Plantation. While sitting in the car in the rain, they wrote what would eventually become Chapter One of Fiddle Dee Death about cousins Lindsey and Margaret Ann discovering a body in an old plantation house on Indigo Island, a fictionalized version of Edisto Island, S.C. When Gail, who was with her Navy husband in Japan at the time, heard what they were doing, she e-mailed that she wanted in on this project and she wanted her character to be Bonnie Lynn Tyler, so her initials would be “BLT.’’ It was just a game at first, something we worked on over holidays for a couple of years when we were together. Then we became more involved in “the book,’’ and things became deadly serious in July 2002 when Nancy called Meg and Gail from Orlando. “The good news is that Blair wants to publish our book. The bad news is we have to finish it by December.’’ At the time, we had only completed seven chapters of the projected 20 in our outline. But we turned in the manuscript on time. 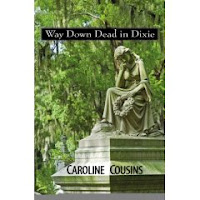 A. It’s fun, but it’s hard, too. Thank goodness for e-mail and unlimited long-distance phone calls. When we’re together (holidays and book tour), we brainstorm and come up with a very detailed outline. Then we divide up the research and the writing. For Marsh Madness, Meg worked on flowers and fish, Gail was on identity theft and gators, while Nancy looked into termites and meth labs. We e-mail chapters back and forth, and then Nancy puts it all together in one voice so it’s as seamless as possible. Yes, we do argue, and we’re not always on the same page, literally and figuratively, but everything works out. We’re family, and it helps that we share so much history and so many relatives. We really can finish each other’s sentences.

Q. What’s the backstory behind your latest novel?

A. All our books take place over holidays – first New Year’s, then Easter, and now July 4th. That the cousins would become involved in more murder and mayhem on this little island within six months seemed truly unlikely, so we decided to go for a cold case in the hot summer. So instead of stumbling over a body, the trio trips over a skeleton and a mystery dating back to 1968. But there’s also some present-day skullduggery involving antiques and a lost diamond, as well as family shenanigans and a little romance.

Q. Why did you choose the name Caroline Cousins?

A. We had our pen name before anything else. “Caroline’’ is a family name on both sides. Also, we’re from the Carolinas and our books are set in lowcountry S.C. And “Cousins’’ describes our relationship.

Q. All of you have homes on Edisto Island, S.C. Why is that area of the South so meaningful to you?

A. Edisto is very much a part of our family. Our maternal grandmother had a cottage on Edisto Beach before there was electricity here, and our mothers and their cousins spent summer vacations on the beach. That house was destroyed by a hurricane in the late 1930s. Then, when we were growing up, we spent much of our summer holidays in a green beach cottage owned by Meg and Gail’s grandmother, Maggie, who was also Nancy’s great aunt. Both sets of our parents later built retirement homes practically next door to each other on Myrtle Street in the 1980s and have lived here full-time for many years. Meg and Johnny moved into their house on the island off Russell Creek Road in time for Thanksgiving 2005, and Gail and Jeff moved into their new house Thanksgiving 2007. Nancy rents the same beach house every year during the winter. Edisto is beautiful and unique and largely undeveloped. Home is where the heart is. We’re home.

Q. What’s next for Caroline Cousins?

A. Ah. It’s a mystery!
Caroline Cousins is the pseudonym for sisters Meg Herndon and Gail Greer and their one-a-half times first cousin, Nancy Pate. (Their mamas are sisters and their daddies are first cousins). Meg, a graduate of Columbia College and the College of Charleston, is a former elementary school teacher who now owns her wedding floral business, Coming Up Roses. Gail, a graduate of the University of South Carolina, was a military wife for many years and worked a variety of jobs, including plantation tour guide. She and her husband Jeff recently built a house on Edisto Island, S.C., right next to sister Meg and her husband Johnny. Nancy, a graduate of the University of North Carolina-Chapel Hill, is the former longtime book editor of the Orlando Sentinel, and divides her time between Orlando and a beach house on Edisto. The trio’s Caroline Cousins mysteries are Fiddle Dee Death (John F. Blair, 2003), Marsh Madness (Blair, 2005) and Way Down Dead in Dixie (Blair, 2007). More info at www.carolinecousins.net

I have just read Fiddle Dee Death - what a delightful story. I had lots of giggles. Thanks ladies. Leigh Evans - Queensland Australia

I just finished reading Marsh Madness. This is a very fun and interesting read. I didn't know until the end of the book that the author's real name is Nancy Pate. What a coincidence! My name is also Nancye Pate. Small world!