The Magic of a Good Book 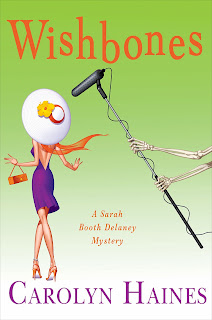 http://www.carolynhaines.com/
FEVER MOON--Book Sense Notable Pick
PENUMBRA--One of Top 5 Mysteries of 2006--Library Journal
REVENANT (RT--4 1/2 stars and Top Pick in mystery, suspense and thrillers)--Carson Lynch is unforgettable, and her first-person, Chandleresque narration is a treat. Add a
brain-teasing mystery, a lot of angst and a generous amount of black humor, and you have a genuine page-turner.
Posted by A Good Blog Is Hard to Find at 10:42 PM

Carolyn,
Yes. that is exactly what I was talking about concerning books and stories. Every time I read a book by yet another undiscovered author, perhaps, the first time author or one that has never really been discovered in a big way, I think what if this book is the next "To Kill a Mockingbird". What if this book was never to be discovered and read.
Years ago author, Mark Lee, was speaking to my book club on his years of working as a foreign correspondent. (Read "The Canal House" as it's marvelous.) He told us that sometimes he would come upon a tribal war out in the middle of nowhere in the jungle. He told us that if he had not written of this tribal war no one in the world would ever had known it had happened. That struck me very much the same way. How many books are sitting on a shelf out there never been read that are our nation's next treasures. No one today is really working on helping undiscovered authors get discovered in a big way. Maybe a few passionate publishers, one's that are in the business for more than just money.
Let's face the facts folks. Publishing is all about the hype, the marketing, the numbers, the given. So what if The Pulpwood Queens did get to be so large they could make a difference. Every day I read words such as Carolyn Haines. Words that I could never express what I could have ever dreamed of to say. Words that are put together in such a way I catch my breath and then read them again for the beauty.
Thank you Carolyn Haines for spreading the word, that reading is important and that our stories need to be shared. You shared with us your wonderful story and we need to thank too Karin Gillespie for giving us this gift of this venue!
Onward book soldiers is what I always say. God Bless authors and God Bless good books. Now let us all get to reading in a big way!
Tiara wearing and book sharing,
Kathy L. Patrick
Founder of the Pulpwood Queens Book Clubs and now, (yes, me too) author of The Pulpwood Queens' Tiara Wearing, Book Sharing Guide to Life, Grand Central Publishing

Amen, sisters of the word. Amen!

(and speaking of spreading the word on good writing - you can hear Karen Gillispie this Saturday on Backstory at www.backstoryontheradio.com or live from Nashville at 98.9fm - and Carolyn later this month talking about the power of words, reading, and story!)