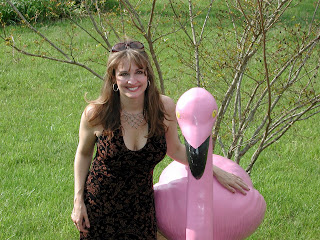 I just received word that January Magazine named my last book, “Don’t Sleep with a Bubba,” as a non-fiction 2007 winner.
As happy as it made me, I’d have rather seen Peter Frampton, a goal I’ve had since my pining teen years, bedroom covered in posters, his chest bare and bird-like, his hair golden and curly.
He was – and still is – my rock star idol, even though there aren’t but seven hairs on his little white head. I’d seen him perform twice as a teen, and he was coming to MY town a couple of weeks ago and I aimed to pull whatever strings possible to get backstage after the show and meet him.
It all started with the preparations, which included a girdle, the size of a tube sock.
Breathe. Don’t forget to breathe. You’ll see him. Maybe.
In just a few hours, you’ll be in the same room with the man of your childhood - and embarrassingly true - adulthood dreams.
Peter Frampton. One of the headliners at the Warren Haynes Christmas Jam that also featured Jackson Browne and Bruce Hornsby.
Deep breath. It’s just a girdle. It’s just an underwire bra with a few problems. The shoes, well, what 46-year-old can’t manage 4-inch heels in a bit of sleet?
This entire ensemble consisted of a personal renovation. I even shaved my legs, the tub appearing as if a gorilla had bathed once the act was over.
Finally I got dressed, slipping on the new high-healed ankle boots paired with black fishnet hose, a short but classy (I hope) skirt, and a semi-snug top. I gazed in the mirror, thinking, “You silly imposter. You’re not 17 again. You’re a PTA mom wearing the trappings of high school girls on the verge of coming across too easy.”
So I looped my neck with pearls in case I died of a heart attack once I saw Frampton, and had to meet Jesus in this get-up.
Frampton, in case you’re lost, is a rocker who rose to fame in the ’70s with his mane of blondish waves, leather pants, double-live album, and major talent. He’s known best for using a talk box while he plays guitar.
He’s the Elvis I never had. Mama had her Elvis. I had my Peter, which he pronounces Pet-ah, in his adorable (love to put that man on my shelf) accent.
I was at the Jam only to see HIM. I desperately wanted to get face-time with the musician my blunt-as-child’s scissors sister called a Scraggly Old Man.
When Frampton read this unflattering reference in a column I’d written, he had a great sense of humor about it during our phoner. That’s journalism talk for phone interview. Sounds much sexier than it really is. “Hmmm. I had a phoner with Frampton.”
For those who read this column and heard my interviews with him, it’s this goal of meeting the man in person that has eluded all others.
Even Mama got to see the fake Elvis when she screamed in a hormonal ho-down: “Rush the stage, Susan. I didn’t buy your ticket for nothing. Rush it. Earn your keep.”
Later into the long evening, after hearing the crushing news the media wouldn’t be allowed backstage, I considered pulling a Mama and rushing the stage. Then I thought about my employers’ reaction once I was arrested and booked at the county jail.
Hours passed, and while enjoying the music, all I could do was think, “When is Pet-ah coming on?”
Finally, like a reverse Cinderella, at the stroke of midnight, or somewhere near there, he appeared.
I jumped up and screamed, scaring everyone in a 400-row vicinity. When he sang his huge hit, “Do you Feel Like We Do?” my heart went into a frightening arrhythmia. Where’s Dr. McDreamy when you need him?
Frampton may be bald and gray, a tad scraggly, but I’ll say one thing: he’s still got it going on.
So I was just wondering, do you feel like I do?
Susan Reinhardt is author of “Not Tonight Honey, Wait ‘Til I’m a Size Six,” and “Don’t Sleep with a Bubba,” chosen as one of January Magazine’s pick’s of 2007. One day, she will see Pet-ah.
Posted by A Good Blog Is Hard to Find at 8:10 AM

The poster on my bedroom wall was a shirtless Robert Plant. Oh my.

Thanks for taking me back a bit. Sigh.

Ha! Sorry, I definitely DON'T feel like you do. No, mine is even worse. My shirtless poter was of...David Lee Roth. *sigh* It's true. My best friend from freshman year even takes great delight in pulling out her yearbook in which I signed my full-page ode to friendship and Latin class "Mrs. David Lee Roth."

Maybe you can worm your way into his nursing home in twenty years disguised as a nurse?

Susan,
Oh, I do understand the love for Petah! My favorite movie when I was in middle school was St. Peppers Lonely Hearts Club Band and I dreamed of being Strawberry Fields just so Billy Shears could be mine!!

I love the Gieco commercial with the talk box...classic!
Petah in Gieco Commercial

I will pray for your meeting to happen somehow! Let me know if you need advice on what to wear:)