Ahh, the Southern Authors Blog has a new leader, one we've not yet worn out with our schedules, and missing posts, and change requests, and technical questions…or, wait...was I the only one that high-maintenance?

(Dear God, did I run Karin off single-handedly?!)

Normally I, like so many others, hate change, but change can be good. It can shake up the people involved and make them reorder their own priorities--like paying better attention to a schedule, for example *cough cough* and even the topic, which, this time of change, happens to be a basic reintroduction of ourselves.

Change was afoot in 1999 when I finally decided to pursue my lifelong dream of making a living as a novelist. My grandmother had just taken her first serious fall as a result of the Parkinson's disease she had been diagnosed with five years earlier.

I stayed with my grandfather, Granddaddy, while she was in the hospital, and late one night we wound up have a rather serious talk. For a man who'd seemed like he'd done everything, Granddaddy had a lot of regrets, and the very last thing he said to me before retiring for the night, was that he was sorry he'd never written anything. 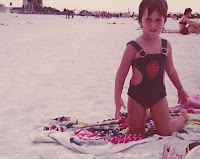 I felt as if someone had smacked me with a two by four while at the same time turned a cosmic Klieg light on me. I'd wanted to be a writer from the first moment I'd read CAT--written by my mother in the sand at the beach--and realized that all those letters could be put together to make actual words.
And I wasn't going to be 80 years old and rattling, "I always wanted to be a writer," off as a regret.
I went home the next day and started my first novel.

It was awful. (No, really. And no, it will never see the light of day, but thanks for asking.)

I had plenty of failures, but we only have so much space here, so I'll just say that I wrote four novels, went broke, and sold my car in pursuit of my dream.

And, at last, Berkley, an imprint of Penguin, published CATCHING GENIUS in 2007, just over eight years after that late-night conversation with Granddaddy.

MATTERS OF FAITH followed in 2008 and won a Bronze Medal in the Florida Book Awards.

And BETWEEN FRIENDS was published in April of this year. 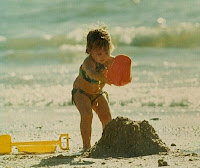 Navigating the ups and downs of publishing has been the most difficult, most emotional, most devastating and delightful experience of my life. But I am doing exactly what I'd wanted to do since I was that little girl on the beach amazed at the words in the sand.

So change is good, and I'm satisfied that I'm going to have to really search my heart to list any significant regrets--though I suppose I'll have to wait until I'm eighty to see if that holds true, won't I? 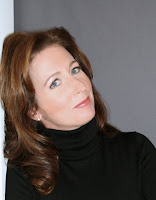 Kristy Kiernan lives in SW Florida, where she still hangs out on the beach building sandcastles, occasionally bitterly regretting that she sold that car, and dreaming up new ways to bother her characters.
Posted by A Good Blog Is Hard to Find at 8:29 PM

This is a beautiful story! I'm sure your grandfather is proud. :)

I am loving your story, Kristy, and my only regret, that all of the wonderful writers I am truly just meeting for the first time through these new blogs have NOT yet graced my doors or book festivals!
Yes, I am loving the stories and all of you please, it's so easy, click that share button on the top of the blog. Share with your friends, Twitter, Facebook, Google Buzz and Reader! Let's really help share all of our stories with everybody!
It's all about the story folks, and I'm sharing Kristy Kiernan's blog right this minute!

I love your dream-come-true story, Kristy! Your books sounds wonderful, too. I'm going to Barnes & Noble today and get one! Blogging with this group has introduced me to a whole new set of great writers and wonderful friends.

Your writer's journey is lovely, Kristy!

A wonderful, encouraging post, Kristy. Congratulations on your success!

good story kristy, you can write a book about it. read some more stories on Business Directory

I always love reading about how people got started in whatever they do in life, and while I knew part of your tale it was nice to learn more. I can't wait for Book #4! :-)

I truly enjoyed Catching Genius and Matters of Faith, and your link showed up on facebook

@klohr1--did it? It still doesn't show on the actual page--Jeez, that probably means it posted five times! Thanks for telling me :-)

Kristy, I love your story! And I've already tortured Kathy, after torturing Karin, with my tech difficulties, so you made me feel better to know I'm not alone!But you got your pictures up, for some reason, I couldn't.
It also makes me feel better that I'm not the only one who gets all emotional over the ups and downs of this crazy business. Thanks for a beautiful, honest story :)

Hey everybody, I found that after posting it on Facebook, click on Profile and there it is, then click back on Home and then it will show up there. A little mojo, I don't know how in the world that works, but it works for me!

Of course you didn't run me off! I always enjoy your posts so much. As you said, sometime a change re-invigorates people which is always a great thing!

Wow! That is an incredible story! Well, when you're eighty, you can proudly say "above all else, I persevered!!" Plus, you published some great books, which is a nice add on to the perseverance part. Either way, great story. Maybe I should give Florida a second chance, I just feel like the Fort Myers area is so ...what's the word I'm looking for...."bllllllahhhhhhh" yeah, that's it. Very sterile. Great job on your success, selling that car eventually paid off!