Q and A with Marti Healy, Author of The Secret Child 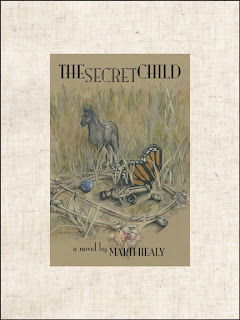 What's the backstory behind The SECRET CHILD?

It was inspired by an actual, historical event that took place near my hometown of Aiken, SC, in 1855. A little boy was found on the train, too sick to tell anyone his name, how old he was, where he was going to or coming from -- and he seemed to be all alone. The townspeople took him off the train and tried their best to nurse him, but he died. They "adopted him" and buried him in their cemetery, with a tiny headstone that says simply: "The Little Boy, 1855." And, ever since -- for 150 years -- that grave has never been without small gifts and tokens that just appear on it. Children especially are drawn to it and leave gifts and flowers. I have always been intrigued with that story -- and started mine by thinking "what if..." What if he had not been alone? What would have been the reason why no one came forward when they tried to find out who he was? And the book grew originally from that. I also happen to live near a Carolina Bay -- an unexplained natural phenomenon that dates back to the time of the dinosaurs. Since no one has yet come up with a provable theory about how they were created (and they have several startling mysteries about them), I have come to suspect that they were created by Fairies. Those two actual places/events are the core of my book. Then, too, there are various cultures represented in pre-Civil War times: Quakers, free Blacks, free African Americans who owned slaves themselves, gypsies (specifically Irish Travellers), women and children -- and they all are cultures that lived "in" the world but not "of" it -- not included in the mainstream culture of the time -- this thread connects them all in a subliminal way.

What is your writing routine?


It's very unpredictable. When I get started on a novel, I can't keep from writing every spare moment. I have some self-discipline involved to get me through any struggles I might be having or to finish for a deadline. But, for the most part, I write when I can, as much as I can. I polish as I go, page at a time, paragraph at a time. I still write everything out long-hand! And then type it into the computer -- that's when I do most of the polishing. I rarely have an outline until I'm well into the book and need to figure out how to finish it. But I was a professional writer for more than 35 years (copy writer for advertising) -- long before I ever wrote my first book. So some of my "habits" may not be typical or appropriate for someone else. It think it is a very individual thing.

Who are your literary influences?


I have three: Ernie Pyle (a WWII journalist who is my absolute hero for style); Elizabeth Gouge (an early-mid 1900s British novelist who writes like I wish I could); and Booth Tarkington (an early 1900s American novelist who never wrote the same book twice -- my idol as a story teller). I collect their works and read and reread them over and over. They were brilliant - each in his/her own way.

What's the most frustrating aspect of writing for you? The most satisfying?


The most frustrating aspect of the profession for me is that I wish I could devote more of my time simply to writing. But since I publish independently, and don't have a literary publicist, I have to do so much marketing for myself. My publisher is my biggest promoter, but there are many, many tasks that I have to do personally. I enjoy speaking to groups and clubs, and doing book signings, but I regret the time I have to spend each day dealing with purely promotional issues.


My satisfaction comes from the act of writing itself. I particularly love to start a book and to finish one. And it feels wonderful when someone contacts me and says they have enjoyed one of my books -- that it touched them in some way. I think most of us write for ourselves -- because we have a compelling need to. But we also write for someone to read us. If no one ever read our stories, how lonely our world would be.


What advice do you have for aspiring writers?

First, read everything you can get your hands on. I also hope that today's writers will remember to practice the craft -- it's so much more than just telling a story. It's the words you chose, the pictures you create in the mind of the reader, the lyricism and joy of the words themselves -- how they look on the paper, how they feel in the mouth and mind. We read differently then we hear. Don't just plop words down -- make them communicate. Don't overlook the beauty of what you are doing.


Marti Healy has been a professional award-winning copywriter for more than 30 years. The majority of this time was spent with The Design Group, Inc., a total communications firm, where she served as vice president and senior writer.
She has also been a contributing columnist for The Aiken Standard daily newspaper since 2004.


“The God-Dog Connection” was her first published book. Her first novel, “The Rhythm of Selby,” won a 2009 Bronze Medal for Popular Fiction from the Independent Publishers Awards for Excellence, and two Indie Awards in 2010 for writing and design. Her second novel was launched in June 2010, titled "The Secret Child," and is appealing to a wide range of readers, including Young Adult and Adult; it was selected as a 2010 Okra Pick by the Southern Independent Booksellers Alliance (SIBA).
Posted by A Good Blog Is Hard to Find at 9:32 PM

Marti,
This year the theme for my annual book club convention is "It's ALL About the Story"! Fascinating to learn where your story came from and I will most definitely be checking out your book to read as allocating some time in August, (my birthday present to myself), to do just that, READ!
To hear of each author's writing process is too something that I find revealing, as each story is different, each writer's approach is also but one thing is crystal clear and you stated it. To be a great writer you have to be a great reader! Lovely and gives me much to ponder and think about!

Marti, I'm always fascinated to read about another writer's process. I write at the speed of light and don't edit until I finish the story.

Best of luck with your new book. It sounds wonderful.

What a great interview, Marti! Your latest book sounds wonderful.

It's also great to see our new fearless leader on the blog this early in the morning. Hi, Kathy! Early happy birthday greetings!

Thank you for your comments! I am not very good with the blogging format - so hope you receive this message. I would appreciate any feedback after reading this book, as it is a new genre for me. Thanks again for your time and encouragement. Hugs, Marti Healy